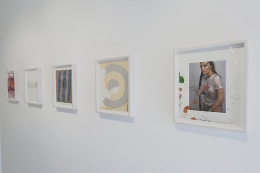 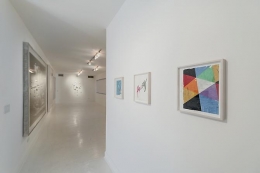 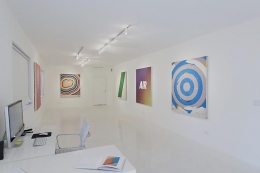 Gavlak Gallery is pleased to present our second solo exhibition of New York based painter Andrew Brischler (b. New York, 1987). Included in the exhibition are five new paintings and eight small works on paper that continue Brischler's investigation into the history of abstraction.

The exhibition "I Made it Through the Wilderness" a line from Madonna's "Like A Virgin", which like all of the paintings and drawings, takes it's title from pop music references, was created by Brischler while reading "Fire in the Belly: The Life and Times of David Wojnarowicz". The plight of David and his contemporaries was paramount for Brischler while making this body of work. When confronted with the blank canvas, he questioned if there is a way to make non-representational painting that delves into the gay experience. Through his paintings, Brischler is developing a language of markings, brush strokes, and gestures that represent "the bodily stains, nervous scribbles, and bizarre color combinations...meant to codify those universal feelings of shame, anxiety, inadequacy, and profound loss..."

By taking the standard tropes of abstraction and reconstituting them onto studio-beaten up canvas, hard edged geometry, saturated bands of color, bold stripes and thick swaths of impasto paint are intentionally imperfect, messy, off center. This approach to painting when combined with the adolescent doodles and drawings randomly appearing in each canvas results in a strongly theoretical and unique form of abstraction that embraces and celebrates the "craft" of painting rather than reduce the object and medium to critique.

According to Brischler "I am most interested in the moments in which even the most expertly crafted paintings begin to fall apart. You see it in the puckered corners of Warhol's massive diamond dust paintings; in the black stains of Al Held's color fields, and in the tremulous lines of Frank Stella's early shaped works. For me, these moments are revelations-real imprints of quiet humanity, tiny failures that make even the most monumental and heroic paintings seem flimsy, vulnerable..."

Since graduating from the School of Visual Arts MFA program in 2012, Brischler's work has appeared in exhibitions throughout New York City and abroad. In 2012, Brischler opened his first solo exhibition, Goodbye to All That, at Gavlak Gallery in Palm Beach, Florida and his work was featured in New American Paintings #98: Northeast Edition. In 2013, he was included in the group exhbition "39 Great Jones" curated by Ugo Rondinone at Galerie Eva Presenhuber in Zurich, Switzerland; and he was featured in a two-person booth alongside filmmaker and photographer David Haxton with Gavlak Gallery at NADA New York. In October 2013, Brischler was awarded a 2013 Rema Hort Mann Foundation Visual Arts Grant.  Forthcoming, Brischler's work will be included in the group exhibition "This is the Story of America" focusing on young New York painters at Brand New Gallery in Milan, Italy. In January 2014, Brischler will contribute a new large scale painting to a major group survey, "Painting: A Love Story," at the Contemporary Art Museum in Houston, Texas.