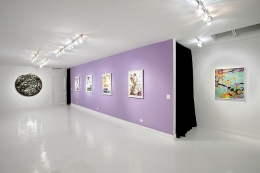 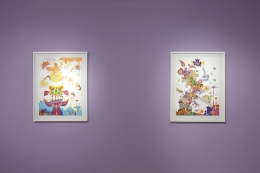 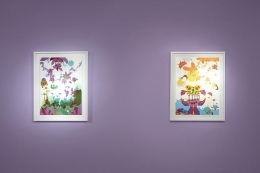 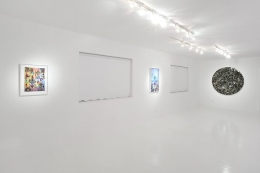 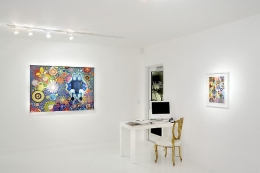 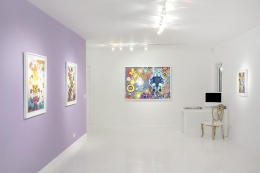 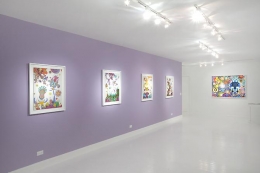 For his second solo exhibition at Gavlak Gallery, Jose Alvarez presents a powerful combination of newly collaged works-on-paper, mica paintings and a video animation that continues his exploration of the complex intersection of mysticism, science, spirituality, and the construction of belief systems. Drawing on his long-standing dialogue with James Randi, the famous magician and renowned challenger of paranormal phenomena, and on his own visits to Houston’s NASA Space Flight Center and to Australia’s Parkes Observatory telescope, Alvarez explores how the unfolding of psychic hoaxes, the perceived supernatural energy of charmed objects, and the mysterious quests underlying space exploration all connect to the strong human desire for knowledge and transformation.

The gallery will be an explosion of psychedelic colors with brilliant works on paper that collage such shamanistic materials as feathers, porcupine quills, crystals, as well as “high art” materials such as watercolor, acrylic paint, and handmade papers. In addition, the other, more contemplative side of Alvarez’s work will be represented in the minimal “painting” that is made entirely of shaved mineral crystal, or mica. Alvarez will also present a new video work composed of abstract geometric animations, which are the opulent accompaniment to his collages and paintings- coupling voluptuous swells of colorful shapes with hypnotic sound to create a peaceful, yet hallucinatory atmosphere.

Jose Alvarez began his career by making a name for himself through charismatic performances where he “channeled” the 2,000-year-old spirit of a shaman named Carlos. In front of live audiences around the world, Carlos’ performances and media broadcasts have been viewed by thousands of people in the United States, China, Australia, Europe, and South America. These performances were the subject of a video work presented in the 2002 Whitney Biennial curated by Lawrence Rinder, and his 2007 solo exhibition at The Kitchen in New York curated by Debra Singer.

Currently based in South Florida, Jose Alvarez was born in 1961 in Venezuela. He attended the School of Visual Arts. Alvarez has also exhibited his work in solo exhibitions at The Moore Space, Miami, Gavlak, West Palm Beach, as well as in the 2002 Whitney Biennial, “We Are Electric,” at Jeffrey Deitch, and "Cosmic Wonder" at the Yerba Buena Center for The Arts. Alvarez’s work was also included in the traveling exhibition "Optical and Visionary Art since the 1960’s" at The San Antonio Museum of Art, curated by David S. Rubin, "Natural Renditions," a group exhibition at Marlborough Chelsea, NY, curated by Diana Campbell and Eric Gleason and “Armitage Gone Dance Exquisite Corpse Drawing Project” at Gasser Grunert, NY, curated by David Salle. Currently his work is included in a group exhibition at the Norton Museum of Art, West Palm Beach, curated by Cheryl Brutvan, entitled “Altered States” with Yayoi Kusama, Fred Tomaselli and Leo Villareal.