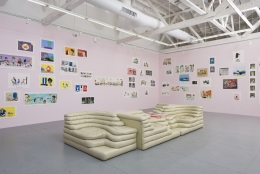 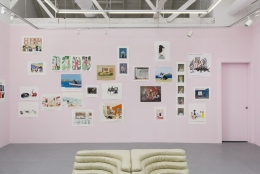 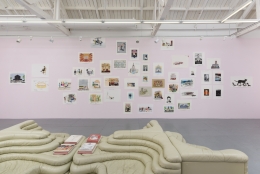 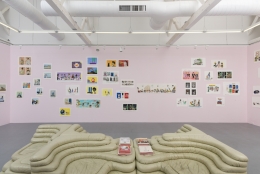 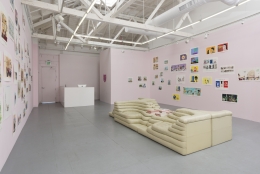 Gavlak is pleased to present The Times, an exhibition of works on paper by Konstantin Kakanias made in collaboration with T: The New York Times Style Magazine. The Times includes a selection of 122 works spanning Kakanias’ five year period working as a contributing editor for the publication. This is the artist’s first solo exhibition with the gallery and the first time these drawings have been exhibited in a gallery context. Up until this point, the pieces have only been seen within the printed or digitally published pages of T Magazine.

Konstantin Kakanias creates whimsical paintings observing the decadent worlds of art, design, travel, and luxury. Through Kakanias’ playful brush and bright color palette, the accumulation of these gouache works on paper and the subject matter ranging from the extraordinary to the banal provide the viewer with a certain view of life.  This joie de vivre atmosphere and its characters may very well be the zeitgeist of our times.

Arriving in New York from Greece in the late 1980’s, Kakanias began working on-and-off as an illustrator for the Style Section of The New York Times Magazine. Kakanias first collaborated alongside the legendary Style Editor Carrie Donovan, and in the 1990’s alongside their new Style Editor Holly Brubach. It was during his time working with Brubach that the artist’s now iconic protagonist and heroine, Mrs. Tependris, was introduced to the broad American public. Mrs. Tependris - part alter ego, part amalgamation of international jet-setting socialites in Kakanias’ milieu - is the art collecting doyenne that appeared not only in T Magazine but also in thousands of Kakanias’ drawings and paintings, several books, art exhibitions, animated films, ceramics, performances, and embroideries all devoted entirely to her and her adventures.

Kakanias created over 400 drawings during his five year period with T Magazine. All works are gouache on paper, and each drawing was always physically sent to the publisher from wherever Kakanias happened to be in the world. None of the drawings were ever created digitally, nor was anything ever photoshopped from its original physical form.   The subjects were never chosen by Kakanias, and the process was always a collaboration between the artist and the editors. Kakanias was given the unpublished article followed by instructions from the editor on what specific elements and/or subjects to illustrate. The limitations of the process were liberating for Kakanias, as he believed it required “no taste or thought on his part” but rather allowed him to give an unbiased interpretation of each subject.

For The Times, the drawings are installed salon style onto pale pink walls of the artist’s design. The assemblage of drawings are arranged in chronological order - starting with Kakanias’ first commission for Needleman, The Cat’s Meow, 2012, at the entrance of the gallery and ending with a drawing of another black cat, Buckle Up (Borge Morgensen’s 1905 Hunting Chair), 2017. The subjects in the drawings range from extravagant interiors like the celebrated salon of the late French decorator, Henri Samuel, to detailed portraits such as that of North West (age 2) attending her first fashion show. Kakanias’ attention to detail in the architectural drawing of the Cinema Rif in Tangier, the balcony at the Mariinsky Theatre in Saint Petersburg, the seating of “front row” VIP’s at the Givenchy fashion show, or his representation of the understated sophistication of Bunny Mellon at her desk, are rendered with such specific details that one feels they are participating in each scene. In the middle of the gallery, a five piece de Sede sofa invites visitors to sit and enjoy the many subjects on view. Joining you there are the artist’s books on Mrs. Tependris, as well as issues of T Magazine that feature his drawings - including a 10 Year Anniversary issue of which his work, Chez Annabel’s, 2014, graces the cover.