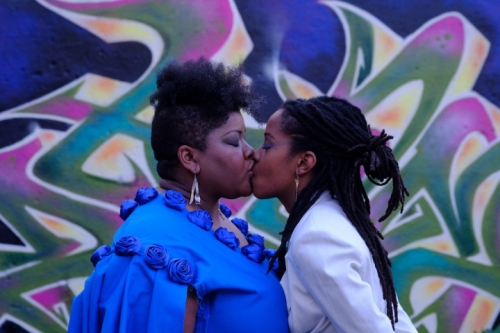 A Six-Hour Performance Centered on One Kiss

Vanessa German and her partner, Janae Brown, present an intimate exchange between Black women, a perspective absent in mainstream depictions of African-American femininity.

Vanessa German’s first solo show in Los Angeles, $lang: Short Language in Soul, features multimedia sculptures that incorporate found objects collected from around her Pittsburgh neighborhood as well as along her travels — fabric, seashells, feathers, toys. She combines these elements to create ritualistic figures or layered wall works onto which she paints portraits of black females, drawing on both African cultural traditions and the African-American assemblage art that emerged in Los Angeles, where she was raised. German’s artistic practice is intertwined with her social activism, manifested in ARTHouse, a community arts initiative aimed at bringing art to children affected by violence.

In conjunction with the exhibition, German will be staging a six-hour performance “soft: the longest kiss,” this Saturday. Performed with her partner Janae Brown, it will present an intimate exchange between Black women, a perspective absent in mainstream depictions of African-American femininity.

Following the performance, German will be in conversation from 5 to 6pm with Sarah Gavlak and Pavel Zoubok, who is presenting the exhibition in partnership with the gallery.