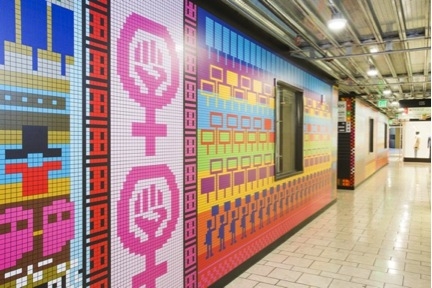 The sixth floor of the Beverly Center shopping mall in LA might seem like a weird spot for smart art with an activist edge, but artist Lisa Anne Auerbach is used to making powerful statements in unexpected places. She's known for knitting protest sweaters with slogans like "Keep Abortion Legal" and "My favorite thing about the war on terror is the language of the war on terror—exaggeration, obfuscation, hyperbole, sound byte, doublespeak, nonsense, bad grammar."

Since April, Auerbach's work has been on display at the Beverly Center as part of a temporary art installation beautifying its halls while the mall undergoes a renovation. Curated by Jenelle Porter, Auerbach's contribution is titled Strikke Strike and consists of knitting designs transfigured into whimsical, politically-charged wallpaper. "I wanted to make the work both friendly and a little subversive," Auerbach tells Creators, "and it's a combination that knitwear does really well. Sweaters are soft, fuzzy, cozy, and they can also be an agent for meaningful dialogue."

Auerbach's wallpaper leverages the style and iconography she developed through her textiles. The knitting technique the artist most frequently uses is called hønsestrik, or "hen's knitting" in Danish, a word Auerbach says refers tothe feminism inherent in Danish knitting history.

"One of the original hønsestrik motifs," she explains, "was the symbol for female with a fist in it, so I included that both as a historical nod to hønsestrik but also to reference some of the political issues of our time."

That the protest culture of the 1970s feels particularly resonant in 2017 is a fact that is both energizing and extraordinarily sad. Auerbach, who has been creating political work since the 2004 US election, understands this all too well.

"This piece was installed around the time of the Women's March," Auerbach says, "and I wanted to reference the idea of people massing in the streets carrying signs and making their voice heard."

The placement of Auerbach's patterns on walls instead of clothing makes their symbolism seem more intentional—the difference between mere decoration and meaningful hieroglyphics. In 2017, a wall that proclaims itself "UNDER CONSTRUCTION" is the perfect visual foil for an embarrassing, tumultuous time in politics. It's a time when almost everyone seems to be saying, "Pardon our appearance," "We apologize for any inconvenience," and "Proceed at your own risk."

Lisa Anne Auerbach's Strikke Strike is on view at the Beverly Center in LA through December 2018.