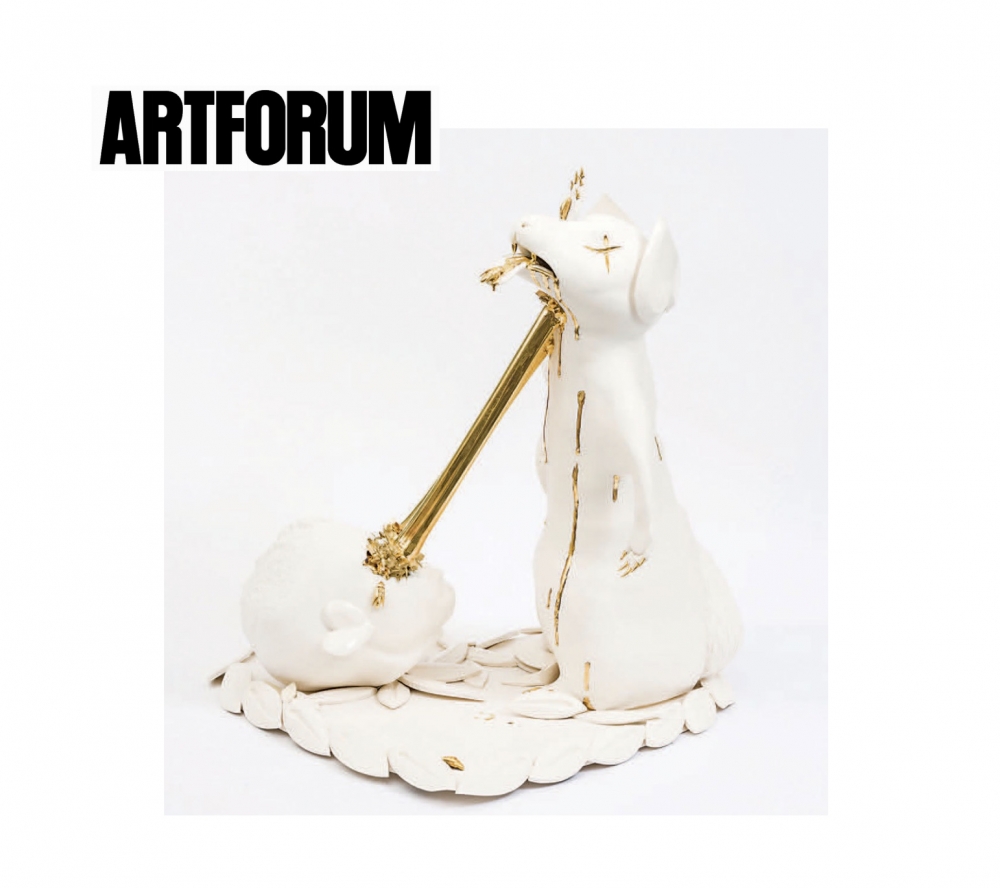 The “splashing sweat” emoji (💦 ) was initially intended to denote physical exertion.
Since its debut in 2015, though, it has been collectively wrangled in that semipublic semiotic rodeo known as texting to signify orgasmic pleasure and, more recently, hip-hop styling (i.e., drip). Because the emoji invites conversation about social media, sexuality, and racialized forms of cultural expression, it could serve as a virtual pendant to Alex Anderson’s archly titled exhibition “Little Black Boy Makes Imperial Porcelains,” the artist’s second solo outing at Gavlak.

The drip was literal: Nearly all the works in the show were covered with drizzles of gold-luster overglaze. The stately pink, purple, and white plinths on which many of the sculptures were arranged matched the cotton candy–colored velvet curtains installed on select walls; the installation might have been envisioned as a regal anteroom for a fey king, or a post-internet museum. (The palette and arrangements also connected to the strategies of artists such as Sadie Barnette and Genevieve Gaignard.) Earthenware representations of plump animals (snakes, rabbits, a leopard) and emojis (hearts, a bomb, a ribbon) abounded, each smoothly sculpted. Unlike the aesthetic programs of the Rococo (clearly an inspiration for the artist), which belied the brutality of France’s colonial occupations, especially in the West Indies, Anderson’s carefully crafted surfaces and forms provided entrée into a more toothsome investigation into the politics of identity (the artist is Asian–African American). In one wall- mounted work, Losing Face, 2019, a white cast of the artist’s visage is attached near the bottom of an oval frame, as though slipping out of register; behind it, the spectral features of a cartoonish minstrel glare outward as a single blue tear (or is it a drop of sweat? of spit?) issues from the tangle of leaves and pointed petals of elegant blossoms adorning the frame.

Losing Face may come across as a little too on the nose. The psychological interplay of self and perception is of course an enduring theme in the politics of identity, its complexities explored in the work of W. E. B. DuBois, Frantz Fanon, Hortense Spillers, Fred Moten, and many other theorists. The tensions of identity felt more potent (and pathetic—in the best sense) in other pieces on display. In the ceramic-panel painting Stains on a Pretty Landscape II, 2020, Anderson conjures two more minstrel figures using the same matte-black glaze, this time applied in gloopy low relief (the results resemble the characters in Jon Pylypchuk’s sad-sack paintings). The pair of floating, amorphous heads is set against dense layers of brushy, abstracted foliage, sculpted golden bees, and the occasional smiley or frowny face. Their bodies melt onto the dewy ground, forming a small, manure-like heap—excrement and nutrient all at once. The pretense of Rococo politesse dropped away entirely at the center of the installation, with the bluntly titled Stop Cooning, 2019, which involved the cast head of the artist piercing a ratlike mammal with the violent and crystalline spikes of his gaze. In both Stains on a Pretty Landscape II and Stop Cooning, Anderson dramatizes racial mattering in inventive ways, evidencing what it is to see and to be seen.

Other works in this ambitious exhibition were surreal and porny, such as the giant heart-shaped lock of Must Be Love II, 2020. Ringed by a serpent, the familiar symbol becomes a lobed field for sexual theater: An eye peers out from the center of a blossom, and a flaccid finger suggestively droops through the keyhole. Most obvious to those who use emoji in pursuit of sexual fulfillment was perhaps Eggplant III, 2018, whose model was the aubergine emoji, ubiquitous in hookup apps and online forums as a cipher for the phallus. Glazed a glossy black and tipped in gold, this sculpture alone would make the most obstinate Luddite 💦 .
— Andy Campbell