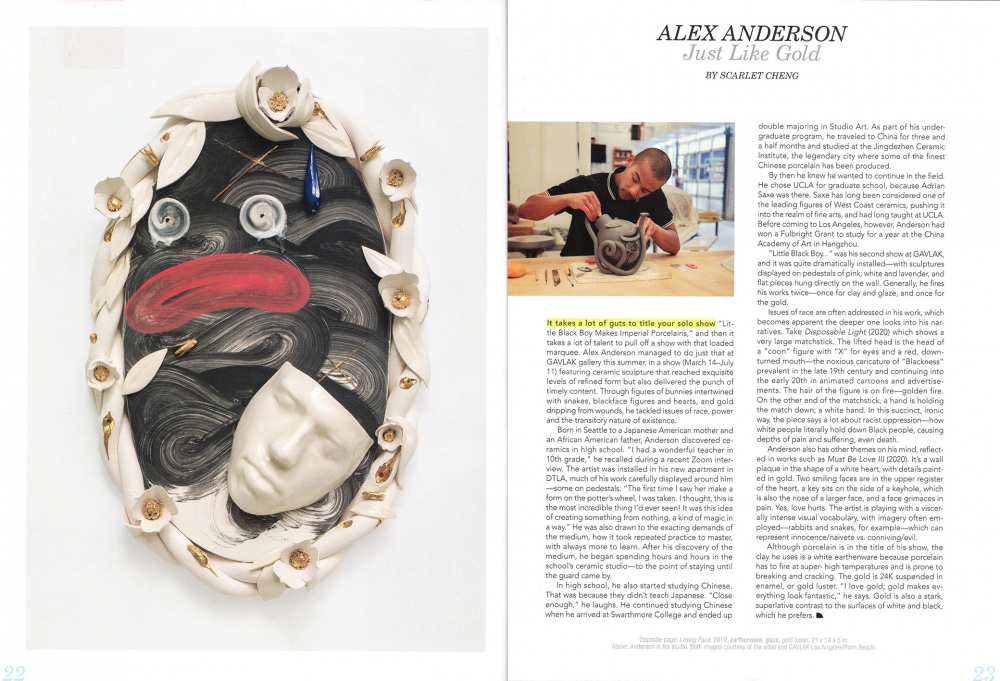 It takes a lot of guts to title your solo show “Little Black Boy Makes Imperial Porcelains,” and then it takes a lot of talent to pull off a show with that loaded marquee. Alex Anderson managed to do just that at Gavlak gallery this summer, in a show (March 14–July 11) featuring ceramic sculpture that reached exquisite levels of refined form but also delivered the punch of timely content. Through figures of bunnies intertwined with snakes, blackface figures and hearts, and gold dripping from wounds, he tackled issues of race, power and the transitory nature of existence.

Born in Seattle to a Japanese American mother and an African American father, Anderson discovered ceramics in high school. “I had a wonderful teacher in 10th grade,” he recalled during a recent Zoom interview. The artist was installed in his new apartment in DTLA, much of his work carefully displayed around him —some on pedestals. “The first time I saw her make a form on the potter’s wheel, I was taken. I thought, this is the most incredible thing I’d ever seen! It was this idea of creating something from nothing, a kind of magic in a way.” He was also drawn to the exacting demands of the medium, how it took repeated practice to master, with always more to learn. After his discovery of the medium, he began spending hours and hours in the school’s ceramic studio—to the point of staying until the guard came by.

Anderson in his studio.

In high school, he also started studying Chinese. That was because they didn’t teach Japanese. “Close enough,” he laughs. He continued studying Chinese when he arrived at Swarthmore College and ended up double majoring in Studio Art. As part of his undergraduate program, he traveled to China for three and a half months and studied at the Jingdezhen Ceramic Institute, the legendary city where some of the finest Chinese porcelain has been produced.

By then he knew he wanted to continue in the field. He chose UCLA for graduate school, because Adrian Saxe was there. Saxe has long been considered one of the leading figures of West Coast ceramics, pushing it into the realm of fine arts, and had long taught at UCLA. Before coming to Los Angeles, however, Anderson had won a Fulbright Grant to study for a year at the China Academy of Art in Hangzhou.

“Little Black Boy…” was his second show at Gavlak, and it was quite dramatically installed—with sculptures displayed on pedestals of pink, white and lavender, and flat pieces hung directly on the wall. Generally, he fires his works twice—once for clay and glaze, and once for the gold.

Issues of race are often addressed in his work, which becomes apparent the deeper one looks into his narratives. Take Disposable Light (2020) which shows a very large matchstick. The lifted head is the head of a “coon” figure with “X” for eyes and a red, downturned mouth—the noxious caricature of “Blackness” prevalent in the late 19th century and continuing into the early 20th in animated cartoons and advertisements. The hair of the figure is on fire—golden fire. On the other end of the matchstick, a hand is holding the match down; a white hand. In this succinct, ironic way, the piece says a lot about racist oppression—how white people literally hold down Black people, causing depths of pain and suffering, even death.

Anderson also has other themes on his mind, reflected in works such as Must Be Love III (2020). It’s a wall plaque in the shape of a white heart, with details painted in gold. Two smiling faces are in the upper register of the heart, a key sits on the side of a keyhole, which is also the nose of a larger face, and a face grimaces in pain. Yes, love hurts. The artist is playing with a viscerally intense visual vocabulary, with imagery often employed—rabbits and snakes, for example—which can represent innocence/naivete vs. conniving/evil.

Although porcelain is in the title of his show, the clay he uses is a white earthenware because porcelain has to fire at super- high temperatures and is prone to breaking and cracking. The gold is 24K suspended in enamel, or gold luster. “I love gold; gold makes everything look fantastic,” he says. Gold is also a stark, superlative contrast to the surfaces of white and black, which he prefers.