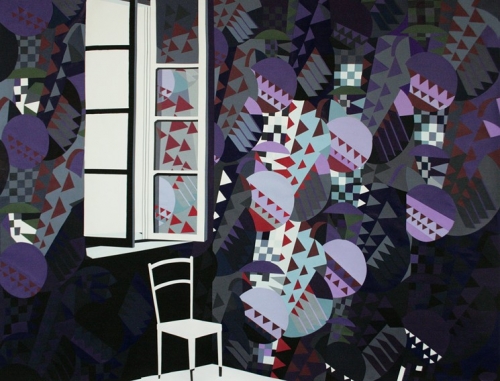 Rollicking technicolor fauvism, intricate cut paper interiors, performance-derived photographs and flirty sculpture mix things up in the current exhibition at Hollywood’s Show Gallery. Les Amoureuses, or The Lovers, takes its title from the female form of the noun, a nod to the casual collective of female artists who have produced the installation. Works by Olivia Fougeirol, Francesca Gabbiani, Marie Peter-Toltz and Joséphine Wister Faure express ideas about love, landscape, the body, and above all, Los Angeles across mediums and styles that differ in form, but share a singular disruptive passion.

Marie Peter-Toltz’s oil paintings are radiant and expressive, with scenes featuring figures and vignettes in large-scale landscape settings. A hybrid biome of temperate and tropical foliage, they are also an art historical hybrid. In one sense, their pictorial arrangements of figures on horseback, foregrounded trees, forced perspective and all-over composition are arguably classical; yet their intense flares of color and agitated, thickly textured brushwork subvert that traditionalism and replace it with something more like a fever dream. If this is Los Angeles, it’s where the wild things are.

Francesca Gabbiani’s smaller mixed works demonstrate a similar conflagration of color and exuberant detail, in outlandish color schemes that both intensify and bypass naturalism. Known for her deft wielding of fine-blade scissors so that a proliferation of tiny bits of paper do the work of individual brushstrokes in her complex collages, here the artist offers such botanical delights. But there is a jaunty, large-scale work in starker tones, a crisp, pop-inflected interior scene which reads more like a jazzy Bauhaus mosaic than a collage, and with the atmosphere of a photograph. Despite its thorough differences, this work is somehow every bit as archetypally L.A. as the oil paintings.

The sculptures and photography in the exhibition for directly reference and overtly depict the human body, personas, and versions of romance. Joséphine Wister Faure’s bust of a man appears to be classical in nature; similar to the untold number of such bronze commemorative figures that fill museums the world over. Yet “The Kiss” cracks its convincing patina and puckers up, ready for the curious viewer who has leaned in to see more closely to plant one on him. Everyone kisses everyone here all the time, don’t they?

Photography by Olivia Fougeirol is perhaps the most concerned with storytelling, yet her displaced sense of role-playing in a new city infuses even her casually intimate images with a sense of ambivalence and disorientation. She has also made a dress of sleek white silk printed with segmented nudes, front and back, using color photographs to replicate the multiplayer surrealist parlor game Exquisite Corpse. In its puckish couture uniqueness and the optical pun of covering a nude body with images of nude bodies, the dress too is every bit Los Angeles.

The exhibition is on view through Saturday, May 4, with a free closing reception and performance event 6-10pm.