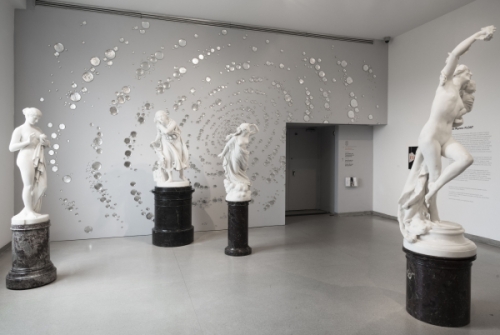 Pools of shimmering silver, flies alighted on walls, golden snakes slithering through museum cases: Rob Wynne’s ethereal work makes a point of being impossible to pin down. His exhibition, Float, is placed as a critical counterpoint to objects on permanent display in the Brooklyn Museum’s fifth floor American galleries. Wynne’s pieces interact well with their surroundings but would resonate on their own, thus making this a strong exhibition on many levels. The intellectual agility of the poured glass wall installations offers at times biting critique of the stodgy portraits and history paintings of the new American republic with their traditional European aspirations, but Wynne’s glass intrusions can by turns be tender and empathetic as well.

Wynne’s aesthetic embraces excess and is pervaded by prismatic, lustrous, and glittering qualities. But beyond any merely decorative bent, his work can plumb depths of his chosen material’s crystalline or chemical structure, hinting at infinite possibilities and interpretations. The purity of glass represents a physical and philosophical stubbornness that makes it both an overwhelming and reliable reference point.  This is particularly the case in the opening piece, Extra Life (2018), a swirling diaphanous galaxy of flickering globules that inhabits the back wall of the elevator lobby. Four white marble neoclassical mythological nymphs – lackluster to my eye – by American 19th-century sculptors masters Chauncey Bradley Ives, Randolph Rodgers,  and Frederick William MacMonnies are caught up in this abstract gesture of universality and motion—Wynne’s (in this case wordless) invocation to wake up seems to be heeded by the carved lasses, and the compositional interaction between the pure dull sheen of the white marble reacting with the silver of the mirrored particles on the wall and the room itself begins to move.

Wynne’s first decisive intervention in the collections is a small Snake (2011) inserted a case of Meso-American antiquities. That this diamond-patterned snake caught in a stylized slither is a wearable gold brooch serves metaphorically to clasp the before and after of American civilization playfully associates the mythological origins and similarities of all culturespre-Columbian and European invader alike. Wynne’s simple gesture is a nuanced commentary on the collection. Recognizing that a seemingly academic museum case full of ceramic in figures and bowls also has the potential for drama and narrative, Wynne’s snake determinedly undulates in one direction right at the back heel of a clay Ecuadorian jaguar vessel, approximately 1400-1700 years its senior, cheekily marching opposite direction.

All of the rest of Wynne’s intrusions, save one, consist of assemblages of lugubrious flat mirrored shapes applied to the walls, many of them passages of text. These are located near sculptures, paintings and objects of furniture which engage the text, either by a reference to the work itself, it’s subject, or a salient characteristic. In I Saw Myself See Myself (2018) a double-sided statement in mirrored glass which plays on Beatrice Wood’s “I Shock Myself,” Wynne presents a tautology which suggests the self-perception necessary in order to create an autobiography therefore acknowledges an inherent narcissism as well. The mirrored words float bluntly on the wall over a pithy 1934 Art Deco vanity and accompanying seat by Kem Weber, a furniture arrangement centering on self-observation and self-beautification completes Wynne’s thought process. On the other side of this room, the cast aluminum larger-than-life Fly (2008) plays the part of gossip, the nemesis of the previously mentioned idea of autobiography. Captured in the halo of a bright spotlight, the literal fly-on-the-wall gazes down on William Glackens’ erotically charged Girl with Apple (1909-1910) and John Sloane’s painting The Haymarket (1907). Sloane scandalously depicts  unaccompanied women entering a dance hall at the turn of the century.

Wynne’s fluid mirrored texts and occasional small sculptures are placed so as not to dominate the space, but that is what they often do metaphysically—I felt the presence of the artist was comparable to the whimsical and whispered voice of a wandering poet following me through the galleries. He would simultaneously bemoan the tropical heat in a Heade canvas and gush over a Bierstadt vista, in Blaze (2018). At other moments Wynne was commiserating with a particularly uncomfortable Copley sitter in a stuffy costume in Translucent Threads of Dawn (2016). The objects of the gallery—the artifacts, paintings, sculpture, and furniture are reflected upon by the artist, literally and figuratively, and become a part of his, and our, stream of consciousness. Many of these connection between works are already there, but by adding in a line of text—a passage from a book, a line of poetry, or simply his own musing, he facilitates and strengthens these networks of meaning with his own chameleon-like texts and forms.

In the final room of the galleries, Wynne claims a well-deserved wall entirely for himself. In a room of contemporary canvasses, Wynne’s The Moon Viewers (2018) faces Alex Katz’s radiant yellow, Arthur 1 (2017). Wynne chooses exuberance as his exit motif,  using the the doorway out of the gallery as a major component of his piece. Deep blue melted glass forms cluster in the top left hand corner of the wall, tentatively beginning to trickle down from above.  The lower right hand corner of the wall displays a heartier eruption of silvery glass butterflies rises from the wainscoting to two-thirds up the height of the wall.  The dark rectangle of the door stands as a sharp-edged and geometric boundary between the two infusions. The Moon Viewers is both a rejection of the confines of canvas, frames and pedestals that dominate this and all the other galleries, and uses the gallery space as a canvas itself. The final piece is a cheerful finish to Wynne’s whirling start Extra Life,  which also took the floor, ceiling and walls on either side as its parameters. Though a text-less piece, The Moon Viewers still engages in the word play and symbolic meanings that the artist has used to circumscribe the art of these galleries. We are left wondering who Wynne’s Moon Viewers are, the butterflies looking at the moon, or the museum visitor reflected in their shimmering wings, or both?