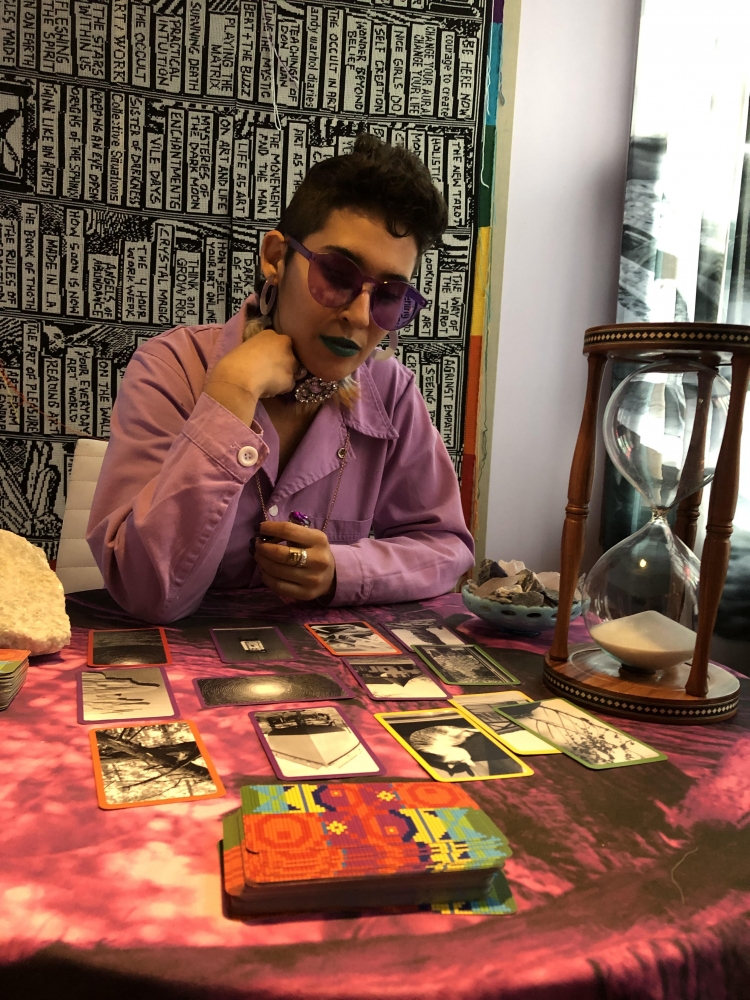 image (Alpine Moon is otherwise known as Estela Sanchez, a performance artist who was a student of Auerbach’s at Pomona College in nearby Claremont.)

She is the titular centerpiece of L.A. artist Lisa Anne Auerbach’s Psychic Art Advisor (2019), an installation for the fair’s curated Frieze Projects section that takes place on the Paramount Pictures backlot.

Nestled behind the movie-set facade of a New York brownstone, the piece co-opts the aesthetics of a psychic’s storefront, neon signage, electric faux candles, and all. Auerbach, an artist known to use an expansive range of mediums to transmit feminist political commentary, most often knitted textiles, also hung her work on the walls: behind the psychic is a tapestry of a bookcase with volumes on both divination and the art market.

Following the advisory premise of the work, I asked Sanchez whether an artist friend of mine would do well in the market this year. Turning over a card with a black-and-white photograph of a house framed by a purple border, she reoriented my question toward my real-estate prospects.

“That was actually my dad’s house in Highland Park, Illinois,” Auerbach later told me. The images on the tarot are analog photographs she had taken as early as 2016 while traveling cross-country and abroad. “A tarot or divination deck or whatever you want to call it seemed like a good way to make people actually look at the pictures and think about them more generously,” as opposed to them scrolling through them digitally, she said.

My reading included a cat reclining in the sun with its paw on its cheek, an illuminated telephone booth, and sunlight pouring into the bottom of a well. In accordance with Auerbach’s intentions, we stared long and hard at each to parse their divine meaning. Alpine Moon’s conclusion was that I would never find the apartment of my dreams.

As for possible connections between the jobs of art adviser and psychic (besides both involving some degree of speculation), they’re “both often women, and there’s a lot of power instilled in them despite their sort of lack of accreditation,” Auerbach said.

“Who has the power to make decision?” she said. “Who’s the little bird whispering in the ear?” Those with convincing answers to such questions are bound to make a killing this week.