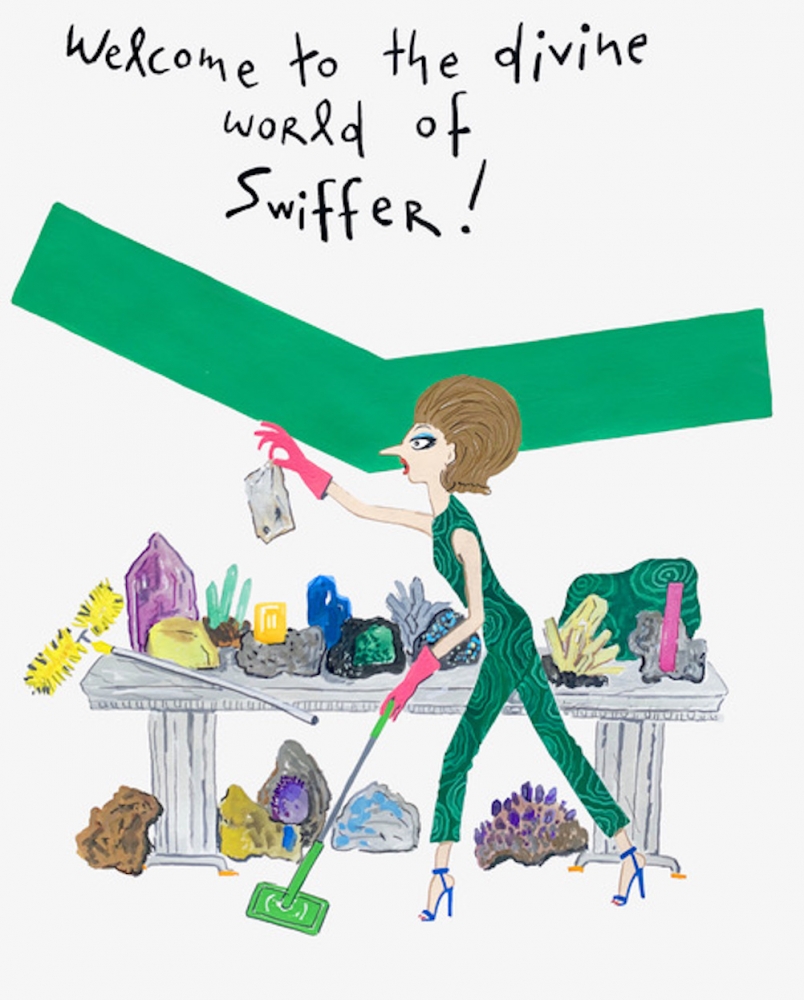 Mrs. Tependris is not wasting her time while in quarantine. She is amusing herself and us via Konstantine Kakanias, who channels her adventures and opinions in his gouache and pencil drawings of her Quarantine Diaries. They are on view at Gavlak Gallery downtown, by appointment, through August 15. http://gavlakgallery.com

Athens-born Kakanias has been chronicling the adventures of his charming alter ego since moving to L.A. in the late ’90s. His own background in fashion and world travels led to his creation of this privileged but charming grande dame who now suffers the indignities of social distancing and house-cleaning like the rest of us. She is furious and has written of her complaint to the Covid-19 virus.

“Miss Corona,You little germ. How dare you even present yourself in front of my eyes? I will destroy you, crush you, smash you with my stilettos. If I ever see you back on Park Avenue, I will petrify you, you little shit. What? You say that swearing is not chic? Who are you to talk about anything chic, you viral atrocity.Because of you, I missed my Broadway shows, my Spring couture fitting, my Salzburg Festival, AND the Cannes red carpet… pure horror! Worst of all, I saw my natural hair color for the first time in 30 years. Do you know how traumatic that was? Don’t ever come close to me, you filthy creature…”

However, after the pandemic is over, she will be around flaunting her collections of shoes and jewelry and art even in a changed world. Really looking forward to that moment. Meanwhile, enjoy my profile of Kakanias from the L.A. Times in 2000.

Mrs. Tependris frets as she paces her living room full of antique furniture and ancestor portraits. Her makeup is intact, her hair groomed, and she remembered to put on her earrings, but she worries about family dramas, recent humiliations. It’s all too much. She needs a change of scene, a fresh start. Where to go? Los Angeles, of course.

Mrs. Tependris is the alter ego and creation of Konstantin Kakanias. In drawings and paintings, she has traveled around the world with him, most recently coming to L.A. Kakanias recorded her impressions of the L.A. art world in dozens of clever gouache drawings in “Her Hollywood Years: Part I” at Works on Paper Inc., a prominent Los Angeles gallery back in 2000.

The announcement for the show was tantalizingly irreverent. “Are You Depressed?” asked the hand-lettered leaflet that looks similar to the ones you see tacked to utility poles. After a laundry list of symptoms, it suggested that if you have not responded to Prozac, Paxil, Wellbutrin, Zoloft or Luvox, you should meet Mrs. Tependris: “a living legend, a lady of healing, a style guru.”

Kakanias estimates that he has memorialized Mrs. T in hundreds of works so far. Some of them are more or less narrative–her decision to escape New York by running away to L.A., for instance. But most of them are little illuminations of current art history–Mrs. T amid the works, the artists, the trendy galleries, the whole art business. The line between the character and her creator is left intentionally fuzzy.

Kakanias’ dark eyes dance with self-deprecating humor as he speaks in seductively cross-pollinated accents. “Mrs. Tependris,” he says, “is this friend of mine who I have created to give me the liberty to play and to revise things from another point of view. The woman is me, but I’m not her. We share opinions, but not about everything.”

One critic, responding to a show of Kakanias’ drawings and painted ceramics in New York last year, called his art “wickedly flippant and completely irreverent.” Another observed that Kakanias has taken on “the subject of celebrity worship, from which the art world is hardly immune, neatly debunking its trendier figures while mythologizing them at the same time.”

Kakanias is inclined to agree about the mix in his work: “It’s comedy,” he stresses, “but it’s not satire–not ill-spirited.”

Tanned and trim, Kakanias, 38, is wearing shorts and a T-shirt on a sweltering summer afternoon in his Western Avenue studio, the same used for many years by Pop artist Ed Ruscha. The walls are aflutter with dozens of sprightly watercolors of the rich and bored in Mrs. Tependris’ adventures in L.A. With helmet hair and Manolo mules, she goes to the Chinatown art galleries where she loses her toy poodle but puts up fliers offering a $10-million reward. Another day, she tries to drive to the notoriously well-concealed Bergamot Station art galleries but cannot find them. Flailing wildly behind the wheel of her convertible, she screams into the car phone, ‘You are where? Where?”

For the most part, however, Kakanias inserts Mrs. Tependris into the prototypical works by celebrated artists. In homage to a famous David Hockney painting, she stands at the edge of a pool looking down at a nude boy swimming under water. In the manner of Conceptual artist John Baldessari, there is a painting of her bejeweled hand pointing at a box containing an emerald necklace and earrings. As Chris Burden, during his performance art period, she has herself locked in a locker for five days.

Mrs. Tependris has acquired a taste for the more daring of the younger set as well. In another drawing, she stands in for Las Vegas-based installation artist the Rev. Ethan Acres, levitating her poodle from a Louis XIV chair in a play on Acres’ own rapturous depictions of pets raised into heaven. Since Kakanias is a big fan of Acres’ art, Mrs. T also copies a recipe for “oeufs Francis Picabia” from the Alice B. Toklas cookbook, emulating the actual acts of the reverend’s wife, who publishes her husband’s favorites in the magazine Art Issues.

“This is like a reprise of art history since she redoes the recipe of Mrs. Ethan Acres by redoing the recipe of Toklas,” Kakanias says, laughing. “It’s, like, who is enough of [an art] gourmet to know all of the references in this piece?”

Kakanias, a native of Athens, moved at age 18 to Paris, where he studied fashion and fine art. He says that his late father, an industrialist, collected art. His family remains in Greece, and Kakanias maintains a residence on the Aegean island of Parros.

By 22, Kakanias was doing illustrations of the couture shows for the French newspaper Le Matin and for Vogue. He also designed fabric patterns for Christian Lacroix and Yves Saint Laurent until, after five years, he took time off to live in Egypt. In the countryside around Luxor, he studied Egyptian art and copied the ancient frescoes. “The marvelous architecture and art, it was the best school ever,” he says. As a result, Mrs. Tependris “walks like an Egyptian,” in profile, with one foot striding forward.

Kakanias returned to Paris and his career in fashion for another five years. Then, in 1988, he moved to New York and a new set of illustration and design clients: Vanity Fair, Tiffany and Barneys.

But like Mrs. T, he decided that he needed a change. “I love fashion. I’m not against anything that amuses you,” he says. “But I got so tired of all that.

Around that time, he met Thomas Ammann, the respected art dealer who died in 1993. “He was a wonderful person, very kind,” he recalls. While visiting Ammann’s home, Kakanias was introduced to important contemporary art that influenced his move away from commercial work.

It was the early ‘90s when he took the first steps. “I decided I didn’t want to do anything that other people wanted me to do,” he says, looking pensive. “I gave it up to dedicate myself to art with a big A. It was scary.”

Initially, he did paintings of children involved in alternately comic and tragic sexual exploits. He also addressed his heritage, building small models of charming Greek-style houses. Family dysfunction was rife within but could only be observed if a viewer peered through the windows.

A few years later, he was showing them at New York’s Postmasters Gallery, and at these exhibitions, he often played the role of a Greek crone, wearing a scarf, dark glasses and peasant costume, and sweeping the gallery with a broom or white-washing the houses. Perhaps this affinity for performance led to the use of Mrs. Tependris as a character in his art, after inventing her in 1993 for fashion illustrations for the New York Times.

“I would love to be an actor,” he admits. “All artists are also actors, I think.”

Mrs. Tependris’ role in his art was magnified by her appearance as Medea, various sultans and sultanas, and even Lord Byron in Kakanias’ fanciful study of Greek history illustrated with his watercolors, “Freedom or Death,” published and exhibited by Stubbs Books and Prints in New York in 1997. Two years later, she played the roles of New York artists and collectors in a series to be published as a book by Rizzoli next year.

The move was not without its complications, of course. Although Kakanias speaks four languages–Greek, English, French and Italian–he couldn’t drive a car. “I took 75 lessons to learn how to drive and still had to bribe the professor to pass the test,” he says with incredulity. “Can you believe it?”

On the other hand, Mrs. T seems to be enjoying her stay here. Her exploits are unapologetically directed toward those who are most familiar with the contemporary art scene. For instance, in one large painting, Mrs. Tependris melds her obsession with fashion and fine art by outfitting herself in a Raymond Pettibon T-shirt, Jim Isermann patterned pants and a Charles Ray handbag. The scrawled text claims, “Mrs. T is trying very seriously to feel, to experience their cultural ideas, their artistic vision.”

However, such dedication takes its toll, since in another drawing, she has established a 12-step support group called Chic Anonymous. Posed as one of the pierced lesbians in Catherine Opie’s photographs, Mrs. Tependris is stuck through with gold Bulgari safety pins, wears a gold Hermes dog collar and has the bloody words “chic anonymous” scratched onto her naked back.

Kakanias employs Mrs. T to both complement and comment on the inscrutability and invention of contemporary art. “It gives me the desired distance between me and the object,” he says. “I choose these artists because I really like what they do. In Hollywood, their revenge against mediocrity is to struggle and to create with their minds.

“This is a tribute to art and artists.”