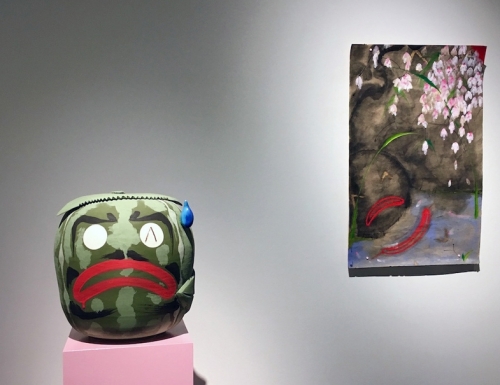 “Lore Re-Imagined: Shadows of Our Ancestors” focused on the preservation of cultural and personal memory. Organized by independent curator Chieko Phillips, who has a decade-long history of working both curatorially and administratively at cultural institutions in Seattle, the exhibition featured artworks by three Seattle-based artists of Asian descent: Alex Anderson, Satpreet Kahlon, and Megumi Shauna Arai.

Anderson often remixes popular culture in his ceramic vessels in order to critique the enduring stereotypes that exist in his Japanese and African-American heritages. An example of this is Anxious Watermelon (2017), a round stoneware container with a lid, made especially for the exhibition. The sculpture is painted in modeled shades of green and features a tense, frowning face with one eye closed and a drop of sweat at its brow, while the lid’s jagged edge creates the texture of hair and metaphorically caps the character’s anxiety. Inspired by traditional Japanese Daruma dolls, which are symbols of perseverance and luck, and the age-old use of the fruit as a political vehicle for racially-charged contempt toward African Americans in the United States, the piece points out the precarious tightrope the artist has to walk between his two identities.

This duality recurs in his other works, such as Untitled Vessel (2017), a tall, janus-faced vase painted with a frowning face in a loose Chinoiserie style on one side and a grinning character, rendered in harsh dark strokes, on the other. Although the faces are turned away from each other, suggesting isolation, both are drooling, perhaps in a shared anxiety. Similarly, the background of the watercolor-on-silk painting, Longing (2018), is shrouded by black clouds, on top of which the artist has painted white-and-pink Japanese cherry blossoms. Together, these works illustrate Anderson’s conflicted perspective on his heritage—whether serene and delicate, or foreboding—as defined by his positioning in society.

Taking a more archeological approach to the exhibition’s theme was Satpreet Kahlon, who was born in India and raised in the US. Kahlon references her Punjabi past with in/ /between (2018), an installation created with found material—balsam wood, bits of string, muslin, tracing paper and masking tape. Based on a trip to India, where she was unable to access her ancestral homeland in Pakistan, the work—appearing almost like a dream chamber—invites visitors into its two sections, the first which contains remnants of Kahlon’s family lore, such as pictures, jewelry, bindi transfers and recordings of the oral histories of family matriarchs discussing and singing Punjabi folk songs, known as bolis. However, Kahlon also acknowledges the inaccessibility of certain aspects of her ancestral history by connecting, via string, the archival material to a second section, which was almost completely closed off, save for a few holes that allow a partial but uninformative glimpse into the structure. This physical obscuring was accompanied by a poem written by the artist about trying to access something that was taken away, posted on a wall nearby. Taken as a whole, the enigmatic installation expresses the loss of ancestral memory that comes with forced migration.

Responding to Kahlon’s work and connecting the threads of heritages—whether transferred, lost or earned—is a quilt-like tapestry by Megumi Shauna Arai, a self-taught artist of Japanese and Jewish decent. Titled Unnamed Lake (2017–18), the work is composed of repurposed textiles that were collected by the artist during her journeys in Japan, the US, and France.  For this communal project, Arai enlisted the help of 42 women, included the show’s curator, to each hand-sew one patterned piece in the Japanese sashiko-style of geometric stitching, traditionally used for mending worn or torn clothing. Arai recorded the participants’ social interactions as they sewed alongside one another, and played the audio on speakers alongside the work, while a visual map was also provided for visitors to see who had sewn the various areas of the finished piece.

Unnamed Lake nicely sums up the ideas of cultural crossings and recollections that Chieko Phillips set out to explore, representing an innumerable sum of histories woven into a single textile and transcending boundaries of age, race, class and ethnicity.

“Lore Re-Imagined: Shadows of Our Ancestors” was on view at the Wing Luke Museum of the Asian Pacific American Experience from June 15, 2018, to April 14, 2019.