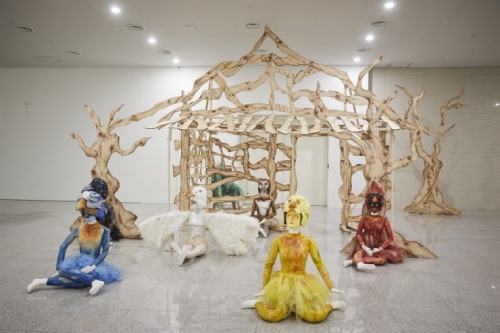 Artist Marnie Weber is known for her fantastical creations combining performance, video, sculpture, music, costume and collage and blurring the boundary between reality and fantasy. The Los Angeles-based artist unravels her latest tale "Song of the Sea Witch" at the Busan Biennale 2020, interpreting the city's coastal nature with her fanciful imagination.

Themed "Words at an Exhibition ― an exhibition in ten chapters and five poems," this year's Busan Biennale combines visual art with literature and music. Writers and musicians are matched with artists to interpret the tales of the port city in three venues ― Yeongdo Harbor, Old Town and the Museum of Contemporary Art Busan on Eulsuk Island.

Weber took part in the Busan Biennale back in 2008 and presented "The Endless Sea," inspired by her musical activities in the 1970s as "The Spirit Girls" before participating again this year. Unfortunately, she could not attend both times.

"I had sent a sail boat of creatures that time. I was planning on going this year except the pandemic changed that," the artist said at an e-mail interview with The Korea Times. "I had been to South Korea as a child. My father was a scholar of ancient bronzes so we came for him to study the art and artifacts while on a grant for his Ph.D. I loved South Korea, the people were so friendly and it is a beautiful country."

For this year's Busan Biennale, Weber is in Chapter 1 "I Had a Single Song," alongside Korean author Bae Su-ah and presents "Song of the Sea Witch," a large film installation that tells the story of a sea witch who lives alone in a cottage by the ocean and one day her solitude is interrupted by a group of birds.

"I wanted the audience to feel the connection between the ocean in Los Angeles and the seaside in Busan. We are connected through water and nature. The film and installation have six birds as well as the sea witch and as birds are migratory creatures, I thought that would be a nice symbolism for a journey. I had only known Busan from what I read and saw on the internet but it was enough to spark my imagination," she said.

Weber read Bae's story "I Had a Single Song" written for this biennale to create her artwork.

"Many of the themes of her story are intertwined in my piece, solitude, transformation, a passage of time. In her story she sees a bird but chooses to not look at it nor speak about it. This hints that the story is about the inner world.

"I didn't want to simply illustrate Bae Su-ah's story but to use it as an inspiration to create a new work that would explore my character's inner world as if seen through the eyes of the sea witch. The Sea Witch is profound, comical, mystical and magical. We don't know if she has conjured up these bird friends out of her loneliness or if they are really there. Bae Su-ah's story is lovely and surreal and I wanted to capture the otherworldly feeling of it with my piece."

In the film, a lonely old sea witch, played by Weber, lives in a cottage and one day a group of birds lands on her beach.

"Their presence after many years of solitude upsets her quiet reverie and sends her on a journey that ultimately changes her. In the installation we will see a ghostly outline of her cottage built as stage flats, her furniture, her figure and the bird characters. There will be the film and soundtrack, and all the elements together help transport the audience into this fairy tale like fantasy. I would like people to feel as if they are momentarily immersed in a dream," she explained.

Weber is the lead actor of all her films and the practice started from her years of doing performance art on stage.

"It is a form of self-expression and a continuation of performing. Each film is like a different self-portrait. I am the one who knows best how to achieve what the character is trying to say. I do choose and direct the other actors so as to have control over the narrative but they in turn help shape the lead character," she said.

The theatrical stage flats and bird installations and the film work in unison to create the scenery that is portrayed in the film.

"It's like looking at an old photograph, it is a new reality of a memory and to have it in a theatrical presentation the viewer has the physical sensation of walking through the memory. I like exploring different realities. The cottage presented in the installation as twisty, flat boards is meant as if you are seeing the scene through the eyes of the crazy old sea witch. She sits inside this skeletal structure listening to music on her radio but then hears birds, she runs outside and the birds are doing a dance at the sea. This is in the movie but also in the installation the birds are outside. I think it helps the viewer feel as if they are entering the movie."

Due to the pandemic which restricted most people from traveling overseas, Weber had to plan her installation based on floor plans and photographs.

"When I realized things in the U.S. weren't getting any better and it would be difficult to leave I had to get much more explicit in my instructions and to not leave things to chance like I like to. I spent many years as a performance artist and so I always like spontaneous creations and the element of chance and happy accidents but it can't work that way if I'm not there." the artist said.

Though slated for Sept. 5 opening, Busan Biennale 2020 is currently only available online through Sept. 20 due to the COVID-19 pandemic. The organizing committee plans to open the exhibition hall according to quarantine guidelines.

The artist recognizes the limitations of online exhibitions which have become a popular response to the virus outbreak.

"I don't think an online exhibit can touch the real experience at all. When you see work online you aren't able to see the textures, the colors properly, the scale and it becomes a commodity in a way. The worst part about seeing work online is the loss of a lovely day with family or friends experiencing the art together, talking about it and creating memories," she said.

['Song of the Sea Witch' by Los Angeles-based artist Marnie Weber is installed at Busan Biennale 2020. The artwork is inspired by Bae Su-ah's story 'I Had a Single Song.' Courtesy of Busan Biennale]
Marnie Weber's paintings referencing folklore, fairy tales and myths are on display at the artist's solo exhibition at Simon Lee Gallery, Hong Kong. Courtesy of the artist and Simon Lee Gallery

In addition to her participation in the Busan Biennale, Weber is also holding a solo exhibition at Simon Lee Gallery, Hong Kong through Oct. 31. At the Hong Kong exhibition, "Song of the Sea Witch" is screened without the installation in Busan alongside a handful of her dream-like paintings referencing folklore, fairy tales and myths.

Weber, in her own words, gets inspired by "things that aren't quite as they seem at face value but what lies underneath, the hidden life behind the veil or mask."

"I'm always looking for what motivates fictional characters and what is their backstory. I especially like to hit the mark between comedy and sorrow," she said. "I love animals, clowns, witches, monsters, and ghosts; anything that can serve as a stand-in for a human. By creating my own folklore rather than using pre-established fairy tales I feel bring it into the contemporary world."

A series of encaustic collages expressed as fairy-tale like realms with witches, maidens, nature, animals and birds are on display.

"Each collage is like a moment in a dream or fantasy world. The girls in the collages wear witch masks and the witches inhabit the landscape. American folklore and America's great depression, along with farming and farm life also are themes and set the landscape," Weber said.

The artist believes that art is vitally important despite the pandemic as it creates a moment to step away and forget about how difficult life is right now.

"I think the pandemic will also feed the work and add a layer of profound feeling as it was created in such a difficult time in our shared experience. Art is a great unifier and community builder. It brings people together on social media and artists can see other artists' work and create conversation. For me viewing art in the pandemic is a bit like research, gathering information for the future, when we can move about and experience art in person again," she said.