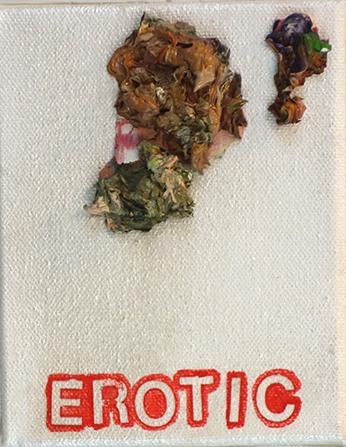 Two thick brown, purple, and green globs of oil paint are dolloped onto the top half of a small white canvas—the word “erotic” is outlined in red below. Next to it are similarly sized paintings emblazoned with the words “seiki” (“genitals” in Japanese), “weich” (“soft” in German) and “fanny flange” (British slang for “clitoris”), each painted with a different treatment. One riffs on the iconic, masculine-identified Jackson Pollock drip, while another suggests a labyrinthine pocket of vulvic space. These are just a few of the one thousand paintings that make up Betty Tompkins’s series “Women Words, Phrases, and Stories,” 2011–16, which debuted earlier this year at the Flag Art Foundation. Culled from responses to two e-mails from Tompkins calling for “words that describe women,” the diminutive paintings are installed in close-hanging clusters on three large walls in the back gallery here. The weight and constant flow of this language—much of which is derogative in tone—is enough to dizzy. In scope and arrangement, Tompkins provides us with a crowd-sourced temperature read on how we’re doing with misogyny (spoiler alert: not good).

Also on view is a small selection of older drawings, as well as a fair representation of more recent paintings from such ongoing series as “Cunt,” 2003–, and “Pussy,” 2011–. Most of these are more intimately scaled than the early monumental “Fuck” paintings, 1969–, for which the artist is perhaps best known, doing away with some of the optic strangeness of those works and replacing it with something similar to, but not quite like, eroticism.