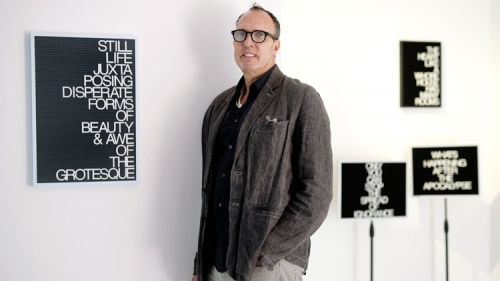 There are no pictures in “Under the Influence,” Maynard Monrow’s exhibition at Gavlak Gallery.

His pithy sayings are displayed in standardized white letters on black, grey or pink cafe boards. (Cafe boards are those black signs with white letters that communicate information such as “wait to be seated” at restaurants or room schedules at convention centers.)

His art has appeared in settings as diverse as Ruffian’s spring 2015 ready-to-wear line and a billboard in a Los Angeles-based alternative art space’s public art series.

It conveys messages such as “Still life composed of the weight of oneself” or “Still life soliciting the cliche to turn another trick.”

“Still lifes are a classically conventional art form that is for the most part pictorial,” Monrow said from his home in New York. “I recontextualize them and make the viewer imagine the ingredients. They paint their own pictures and it’s unique to everyone.”

Even when the works don’t reference still lifes, they’re always provocative and humorous. Pieces might advise viewers to “Never allow debt or doubt impede ones motion” or “Quote me if Im wrong.”

Monrow likes the tactile quality of cafe boards and making art out of ready-made objects. “In a way, I’m serving it,” he said. “It’s intellectual food for thought. I’m a provocateur of cogitation.”

Reading the works of great thinkers and writers inspires him, as do current events. “I enjoy thinking,” he said. “It’s my studio.”

The placement of the words is as important as their meanings. All are right-justified. They cannot exceed nine lines for smaller pieces or 11 lines for larger works.

The line breaks are particularly important. “Text doesn’t just convey a word,” he said. “It’s a form.” His first priority for placement is “what looks best on the board,” he said.

By positioning his text flush with the right side of the board he creates negative space on the left and forces the eye to confront the words in a way we’re not accustomed to because we read from left to right.

Breaking up words — particularly separating prefixes from the rest of a word — also invites multiple interpretations. Consider the directions a piece like this could go:

The Trump administration has given him “a lot of food for thought,” he said.

Although he’s influenced by the work of other text-based artists, such as Rene Ricard, Jenny Holzer, Felix Gonzalez-Torres and Lawrence Weiner, “he’s such a unique character,” gallery owner Sarah Gavlak said. “He’s more on the poetic and flamboyant side.”

In addition to making his own art, Monrow has worked with contemporary art collector and seasonal West Palm Beach resident Beth Rudin DeWoody for eight years, advising her on the display of her art in California, New York and West Palm Beach, among other tasks.

De Woody owns a large neon work by Monrow as well as five word pieces. “I love the sense of humor and the use of everyday signage that we all see injected with his own funny sayings,” she said.

Monrow said he’s hit his stride with the cafe boards. Like a chef concocting new recipes, he’s likely to continue serving food for thought for some time to come.