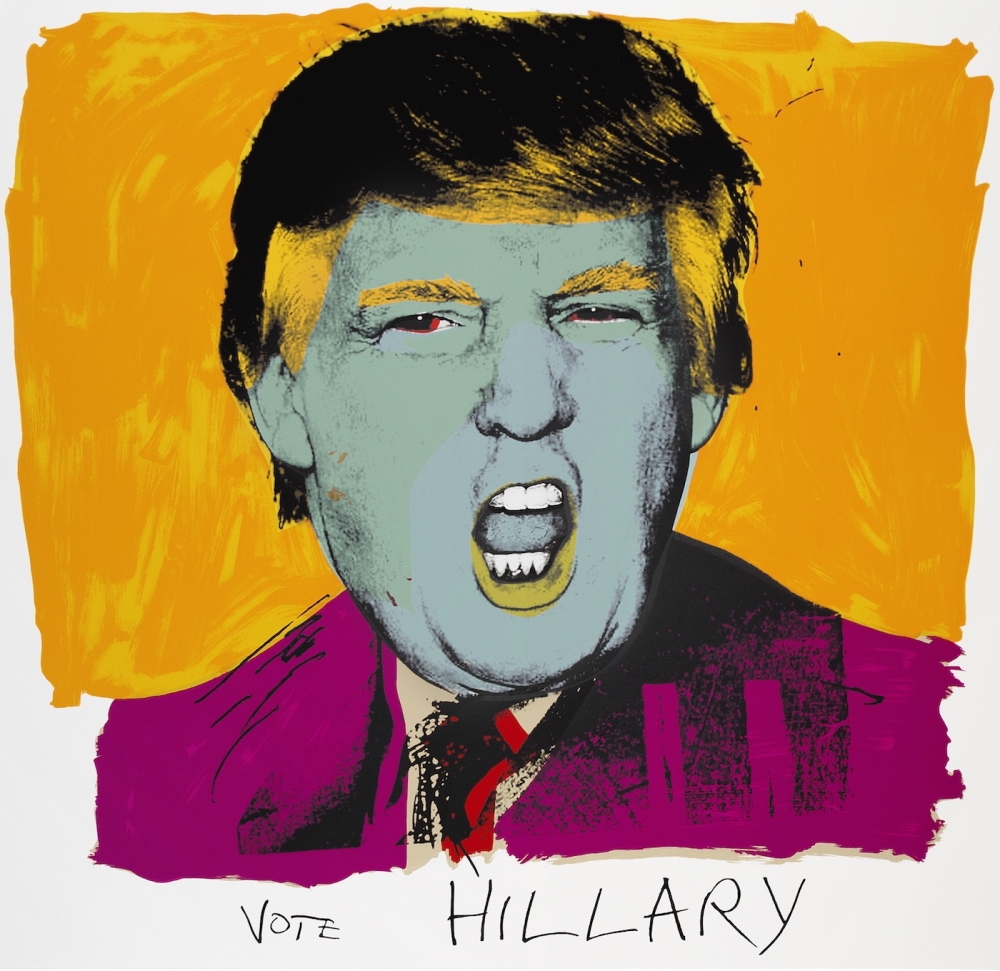 In 1972, Andy Warhol created “Vote McGovern,” a political screen print for the Democratic presidential candidate, George McGovern. The work seems straightforward. Depicting Richard Nixon against a repulsive, high-pitched orange field, with green and blue skin and orange eyes, as if he were a vampire, the caption reads, “Vote McGovern.” The message was clearly understood by the IRS, which repeatedly audited Warhol’s taxes, causing him to keep the very detailed financial records described by Pat Hackett in The Andy Warhol Diaries (Warner Books, 1989).

Deborah Kass often tweaks modernist works. “Vote Hillary” (2016), her political screen print for Hillary Clinton, uses an uninviting portrait of Donald Trump with the caption “Vote Hillary.” Long ago, when she was my student, Kass painted a copy of Eugène Delacroix’s Ophelia. More recently, in reworking paintings by famous male modernists, she offers a feminist critique of artistic creativity. Some other distinguished contemporary artists have adopted this strategy — Elaine Sturtevant and Sherrie Levine, to name two. What’s distinctive about “Vote Hillary” is its political role. Only art students know the sources of some appropriations. But like all successful political art, “Vote Hillary” has a message that is immediately accessible.

Normally when an artist conjoins words and an image, they work together. Puzzles, then, are provoked when that doesn’t happen, as in René Magritte’s famous picture of a pipe with the caption, “This is not a pipe.” Why did Kass not just silkscreen a picture of Secretary Clinton and add the caption, “Vote Hillary”? What was gained by substituting the portrait of Trump? The same questions can be asked about “Vote McGovern.” Originally Warhol was a successful commercial artist. Advertising combines words with images to make products attractive, like the women’s shoes depicted by Warhol. But “Vote McGovern” gets attention because the words work against the image. In that way it’s like an advertisement saying “Buy a Chevrolet” that shows an ugly, beat-up Volkswagen.

Owning a convertible may not make a balding, aging man youthful and sexy. But as many critics have rightly observed, advertising typically functions by irrationally associating personal qualities with commodities. If you stop to think, an advertisement like the hypothetical one for Chevrolet may fail. But “Vote McGovern” is a successful political work because it does cause you to stop and think. It asks: would you really vote for someone who looks as nasty as Nixon? Even if you don’t agree with Warhol’s politics, you may be persuaded by the creepiness the image reveals.

It is prima facie sexist to judge female politicians by their looks, of course, and what counted about Hillary Clinton, her supporters rightly claimed, was her policy agenda, not her personality or skills as a candidate. When Kass asks us to reject Trump on the basis of her unflattering image of him, is she, like Sarah Silverman, whose stand-up comedy routines deconstruct clichés about women, playing with a double-edged sword?

“Vote Hillary” and “Vote McGovern” employ exactly the same visual strategy, with Kass updating Warhol’s image to serve a new context. Younger voters who haven’t studied art history would not immediately grasp her allusion to “Vote McGovern.” But surely Kass’s essential idea was clear to everyone. Trump replaces Nixon, since the reasons that Warhol had for supporting McGovern are much like those that Kass had for supporting Clinton. Indeed, on YouTube, Kass has explained her politics in straight, i.e., unironical, ways.

Just as McGovern was defeated, so too was Clinton. The parallel between Kass’s picture and Warhol’s makes immediate sense, because in many obvious ways Trump is Nixon-like, from corruption to impeachment. Though he survived the latter, perhaps he too will resign.

In a much quoted statement, Karl Marx says, “Hegel remarks somewhere that all great world-historic facts and personages appear, so to speak, twice. He forgot to add: the first time as tragedy, the second time as farce.”

But, still, the picture is something more than an art world joke, for now, whatever its creator’s intentions, “Vote Hillary” has an afterlife. Did Kass think that this buffoon would go away after Hillary won? That certainly was my hope. Or, rather, was she warning of the darkness and danger he represents, especially now — a danger that predated him and will persist after he’s gone? In Kass’s work, Trump’s face is contorted in rage, his mouth snarling in a demagogic roar. What was, in 2016, one side of his personality, has devolved into a singular persona. Remember that most observers regarded Trump as a clown before he was elected, not as a wannabe dictator. What can we say about an image that understood that root persona early on, and froze it in time?

Marx’s famous sentence, “Men make their own history, but [ . . .] they do not make it under circumstances chosen by themselves, but under circumstances directly encountered, given, and transmitted from the past” perhaps is a description of the relationship of Kass’s art here with Warhol’s. Nixon’s downfall came about because he, like Warhol, loved to record. Will the same thing happen to Trump? His manipulation of visuals has already backfired with the Bible photo op, and he has yet to regain his footing, while protestors in the streets have succeeded in capturing the public imagination.

Kass is a super-subtle artist and so I am only unpacking what “Vote Hillary” says. If her image has now been destabilized, that’s because it’s political art.