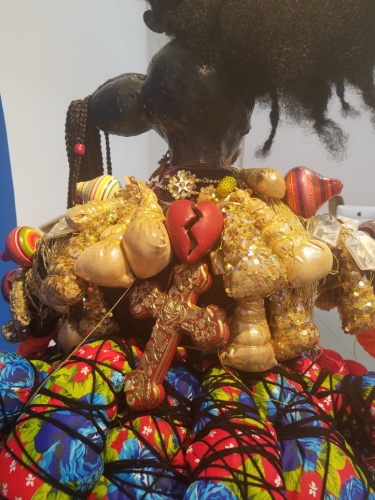 Electric and Verbose back detail. Photo by Jenny Begun.

Gavlak Los Angeles
through May 25th

“Growing up I did not fit in. I never knew the Slang of the day. I was always ‘other’ & ‘outside of’, even in my own community I was strange. This changed for me when I had no other choice but to listen to my soul, to trust it. The parts of myself that only quake from the inside of the inside of the inside.” ~Vanessa German

Vanessa German is a powerful poet. Her potent charged words come forth in her riveting performances. Striking, they produce emotional ripples, provoke reflection, and inspire action. She speaks passionately about many urgent issues of the day – crime, violence, discrimination, identity, community, and hypocrisy of religious and political institutions. And just as fervently she speaks about Love – love for one’s family, neighbors, nature and our planet. When speaking of social ills, German doesn’t just point things out, she actively works within her community in Homewood (Pittsburgh, Pennsylvania), striving to bring lasting changes, protect, empower and also heal. All that the artist is and does literally and figuratively is imbedded in her artwork, which is magical and powerful in its imagery and the ideas it puts forward.

$LANG: Short Language in Soul is German’s first solo show in Los Angeles. It is currently on view at Gavlak Gallery. With ample space between each other, there are five large sculptures in the exhibition room. They are mounted on pedestals as if in the act of veneration. Just as the makeshift platforms on which the figures stand, everything is assembled from a multitude of found man-made and natural objects stitched and tied together. There are strings of beads, paint brushes, parts of broken jewelry, steel wool, toys, glass bottles, wooden shoe forms, cowry shells and crystals of different sizes. And these are just examples of the variety of objects the artist uses in her work.

These are Vanessa German’s Power Figures. Even though a penis and breasts are included in the assemblages, the figures seem genderless. They are physical reincarnations of thoughts and prayers, individual or communal. They contain the energy of intent. Their function is to protect, to help heal, or to bring positive changes. One of the ways German transfers her positive energy into the figures is by writing: “Sometimes they have [inside] an entire text, an entire poem that I wrote. I write what I want a [sculpture] to do and then allow others to contribute as well. I’d crowdsource through social media by posting that I’m making a Power Figure to protect the water, for example, or to help people heal and overcome the feelings of despair and distress.” People write back. Sometimes they tell her the whole story and sometimes they just give a name and a couple of words. Everything gets transferred onto paper, which is then ripped and the pieces are placed in the many small bags (or swaddles, or prayer beads, as the artist calls them) that make up the forms of the figures.

“Throughout time, around the planet, one of the ways that human beings held objects, materials, and other human beings sacred is by swaddling them,” says German. Aside from the power-carrying written words, these swaddles include other things: like teddy bear stuffing to keep the weight light, fabrics from German’s old clothes, sometimes there is hair, or a little bit of earth. According to the artist, “everything in a Power Figure has a strata of meaning; every symbol, every object, and every element of the process is purposeful.” Like the plentitude of Catholic relics – a doll of baby Jesus, plastic key holders with images of the saints, a crown often seen on Catholic sculptures of the Virgin. These are “holding a place for the pure power of the human faith,” but at the same time stand in as a reminder of abuse prevalent within the dogmatic religious institutions and “for the people who have been betrayed by other human beings who said they spoke for God.”

Amazing and surprising revelation for me was hearing German’s story of how she started making her figures. As a child, she was very interested in the representation of a human form. “I remember when I’d hold dolls, I’d look at how somebody made their little tiny hands.” The first figure German made was when, after one Christmas, her mother encouraged her and her sisters to make Christmas tree Angel toppers. But German didn’t use the craft store prefabricated dolls like her sisters. She made a figure crafting its face out of self-hardening clay, using beads on its face and some rusty nails that were aplenty outside of her mother’s barn used as a studio. “I stuck those all in the head of this figure. That was the first time that I really let myself make something.”

Later on, when German was showing her dolls at a craft event with her mother, “a Pre-colonial African History expert from Carnegie Mellon” drew a parallel to African ritual sculptures that were believed to be possessed by spirits and activated by the power of communal rituals. The young artist wasn’t aware of that and explained that she used nails because they communicated to her “the kind of texture and the kind of body, the kind of emotional spiritual language. And so that was the first time that I was connected with the idea that there was a global practice among people around the planet of making embodied powerful powered figures.”

Language is very important to German. A line from her poetry is printed on the two adjacent walls of the gallery in the current exhibition. “Language is power, connection, history, context, creativity… Language is a body, & when we as Black people on this land, transform language, shapeshifting it with the ingredients of our souls, our imaginations, then often these cultural products are danced off with… think..hip hop & rap & bebop & _________. This shapeshifting of language is an act of resistance & insistence…”

From the first look, German’s Power Figures reminded me of larger versions of voodoo dolls made famous by Hollywood: pierce its heart with a needle and your opponent is going to have an immediate heart failure. While German’s work has been compared to Betye Saar’s, an interesting fact was that before Saar started creating works using African symbology she went to Haiti to learn about the practice of making physical objects that contained the energy of intent, which could be harmful or protective. To Haiti, as well as other parts of the Caribbean and Latin America, this practice was brought from Africa by enslaved people who kept their native rituals and believes but had to adopt and camouflage them within the imposed practice of Catholicism.

The exhibition continues. Below the printed text, there is a row of tennis rackets that are used to frame painted faces of black women. Just as the sculptures, the portraits have added components that are not only visually beautiful but also can tell a different story about each woman. In Flight, 2019, there are two faces joined by a common braid, perhaps sisters. Their lips are made of large cowry shells. A new element in German’s work – she paid a lot of attention bringing out the features of the painted faces. In Stylist, 2019, the face is intricately collaged by adding glitter to shape the full lips, a crystal in the place of the left eye, and several strings of red rhinestones to outline the face.

These are all new works that came about over 18-day period in Mexico earlier this year during an artist residency. “I finished the work in LA. I actually started some of the tennis rackets in Pittsburgh. One of the joyful revelatory unknown is why the choices happen. There is an aesthetic and conceptual intention in the process, but it’s not a 100% of the process. So part of the answer is I don’t know why that work at this time. There is mystery in the studio. There is deep listening. I’m waiting for [a portrait] to tell me its story. I’m in communication with each individual face. And sometimes I have to ask out loud What do you need? What is it that I’m reaching for? And What is it that you are saying? How do I know that you are right? And there is that part of the process that is… where I have to surrender.”

German stands very clear on her identity and speaks powerfully on behalf of the people who look up to her as a leader in the community. However, her work does not only speak to or about being black. Though their lives and experiences are an integral part of the work, it is not distancing all the rest of the human kind as the outliers. On the contrary, her work is relatable to all of us. And the Power Figures are standing strong ready to protect everyone without looking at their skin color because suffering is universal.

Vanessa German will do a performance at the gallery on May 18.