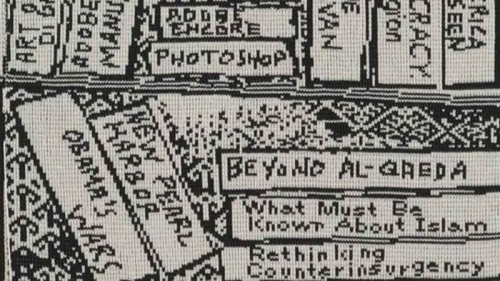 If you can’t judge a book by its cover, what can you learn about people from the books on their shelves?

Quite a lot, Lisa Anne Auerbach’s calmly enthralling exhibition suggests. More important, the L.A. artist’s second solo show at Gavlak gallery asks: What do we learn about ourselves when we discover what other people are reading?

Titled “Libraries,” Auerbach’s exhibition consists of 11 tautly stretched tapestries that depict full bookshelves. Most have six shelves jampacked with so many volumes that only their spines are visible. No authors’ names appear, only the titles. Most of the volumes are thick. And the titles are short.

That’s because Auerbach weaves her works, in black and white strands of Merino wool, on an old-fashioned loom. It’s impossible to weave curved lines, so her letters look as if they are pixelated — or made with building blocks, like Legos. They can’t be read quickly.

Spatial concerns are not the only reason Auerbach has not identified the books’ authors. More interested in subject matter than in name-dropping, she eliminated the authors’ names so that viewers — or readers — would have to engage ideas and topics.

It’s as if the tapestries want visitors to take the time to read slowly. That’s what Auerbach did when she wove each title. The amount of time she and we spend with her “Libraries” does not come close to the hours, days, weeks and years the books’ owners spent reading.

Auerbach also has refrained from naming the book owners. All that identifies each piece is a color-coded band and the various bookends Auerbach has scattered on the shelves, sometimes to sharpen their compositions and sometimes to provide comic relief.

Three panels are filled with books that belong to someone extremely interested in yoga, as well as spirituality and enlightenment. A second trio features many books about medieval history as well as a good number on alchemy, secrecy and literary theory, all interspersed with novels. A single panel zeros in on global ecology.

The more time you spend in “Libraries” the more fun you have cross-referencing titles, formulating ideas about what kind of person would have such books on their shelves, and wondering why they’re arranged as they are.

But all that pales in comparison to your capacity to read Auerbach’s engrossing tapestries as concrete poems that encourage visitors to leap from one title to another, improvising story lines that spread out in every direction. Like books, “Libraries” brings complexity to identity, creating connections and overlaps where they’re least expected.