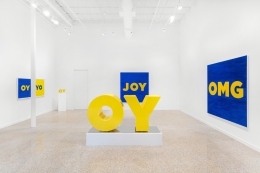 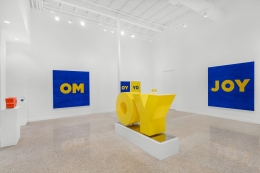 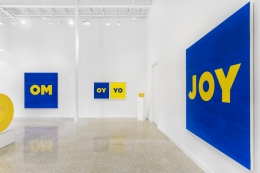 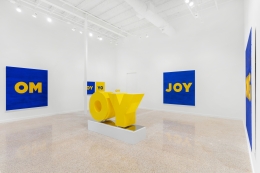 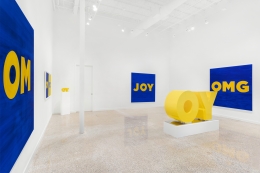 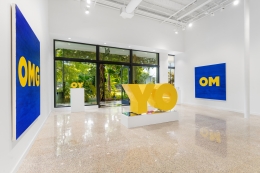 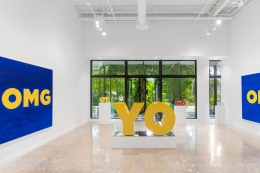 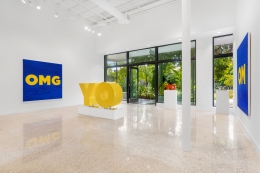 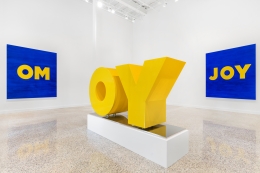 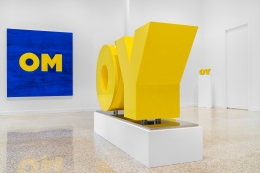 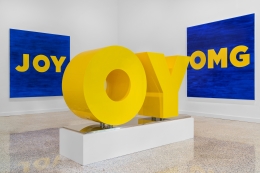 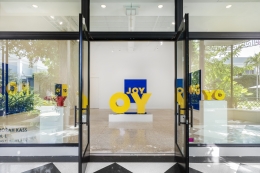 GAVLAK Palm Beach is pleased to announce S, M, L, a solo exhibition of 2D and 3D works by Brooklyn-based painter, printmaker and sculptor Deborah Kass (b. 1952, San Antonio, TX).
S, M, L is the established artist’s first solo exhibition with the gallery, featuring both new and editioned works. For her exhibition at Gavlak Palm Beach, Kass will present her renowned sculpture, OY/YO at the forefront, presented in variable colors and sizes: small, medium, and large.

Deborah Kass is an artist known for working at the intersection of art history, popular culture and identity – in particular relating to Jewish culture and elements of difference and the construction of self – all three of which come together in OY/YO. As such, she describes the piece as a distillation of everything she cares about in an unexpected form.

The inspiration for OY/YO came from Ed Ruscha’s 1962 painting OOF which Kass had seen on display at MoMA in New York City; she’d spent her downtime wandering around the museum looking at famous Post-War masterpieces between classes at the Arts Student League. She’d go on to create her own version of the painting in 2011 as an homage to Ruscha’s bold work, inscribing the word “OY'' in Ruscha’s characteristic Lamborghini-yellow. Lettered in clear typography rather than handwriting, the words are definite and impersonal in shape. Kass furthers Ruscha’s comical contradiction by evoking her own onomatopoeia: the common expression “Oy,” an abbreviation of the Yiddish exclamation, “Oy Vey,” connotes the same sense of humor and irony as OOF, nuanced with “#Jewtude” in similar monosyllabic fashion. The real power of Kass’ painting transpired when she caught a glimpse of the work reflected in a mirror in her kitchen: behind her, she read the letters aloud and realized “OY” also spelled “YO” backwards. Kass had an epiphany: she decided to turn the painting into a sculpture so it could be seen from both sides. “Sometimes you get really lucky and art just makes itself,” says Kass, who is 68 and says she has been waiting for this kind of magic all her life.

In particular, OY/YO explores the combination of imagery and language: “Oy,” is a Yiddish term of fatigue, resignation or woe; “Yo” is an urban slang greeting sourced from the artist’s native Brooklyn streets. In addition, “Yo” in Spanish means “I.” Each usage has been co- opted in popular culture. “The fact that this particular work resonates so beautifully in so many languages to so many communities is why I wanted to make it monumental,” Kass told the New York Times. Originally conceived as a monumental sculpture, it was installed for a limited time in Brooklyn Bridge Park. OY/YO became an instant New York icon and photo op for tourists and residents of all backgrounds, for whom the pluralistic spirit of the double-sided interjection resonated deeply. The artist considers herself to be a “total, absolute, 100 percent provincial New Yorker.” This work uses the city’s culturally specific, yet universal lingo to communicate the collective pride and exasperation of living in the big city.

In an art world that all too often resembles a boys’ club, Kass has long been an agent provocateur on behalf of the feminist perspective, infiltrating the male spotlight through works freighted with her own Jewish female identity. Walking the line between respectful homage and brazen appropriation, Deborah Kass mimics and reworks the signature styles of iconic 20th century male artists, often injecting them with a feminist twist. No artist -- not Frank Stella, Andy Warhol, nor Robert Indiana -- is safe from the scruples of Kass’ revisionist notion of art history. “They’re my daddies,” she has said, in witty acknowledgment of her indebtedness to her male antecedents. Kass’s alterations of their work in her own paintings are both bitingly funny formal interventions and keenly critical commentary on the historically dominant position of male artists. Kass’s work engages critically with the history of politics and artistic production, engendering an early dialogue regarding the politics of gender in visual art, exploring the power relationship between men and women in society. With a practice spanning across media and disciplines, Kass’ work is notable for her pointed feminist critique: feminism is central to her approach. As she explains: “It is about my desire to be part of what they’re a part of. [...] I think the desire was ambition and greatness. For women of my age, it was still not very cool to be overtly ambitious.” Through her use of appropriation, she often mimics the work and styles of male artists to comment on and rewrite the patriarchal narrative of art history. Often working in series, Kass forms a poignant and didactic political commentary while retaining a sense of self-reference with her autobiographical paintings, lyrics, and prose. “It was very clear to me that there was something new from a formalist point of view: a new, female subjectivity,” she has said of the 1970s art world. “It’s quite stunning to think about all the women who were painting in New York and all the men they’ve influenced. When you say Julian Schnabel, I think Joan Snyder. Ross Bleckner, I say Pat Steir. In Carroll Dunham, I see Elizabeth Murray.”

Deborah Kass's work reveals a personal relationship she shares with particular artworks, songs and personalities, many of which are referenced directly in her paintings and sculptures. Her work touches on notions of Americanism and identity in popular culture, exploring art in terms of new subjectivities, often re-positioning and reimagining iconic popular imagery from her own personal cultural point-of-view as a gay, Jewish, female artist. “My parents’ music [...] it has really informed my work. Start with black culture, throw some Jews into the mix, and you end up with the American songbook and there is nothing greater. Blacks and immigrants making the most important American contribution to the world.” Since the 1970s, Deborah Kass has riffed on modern artworks by famous white men to reflect her experience as a Jewish lesbian. Here, Kass remakes Robert Indiana’s LOVE (itself a coded homage to queer male desire) with her Yiddish-New-Yorker version, ‘OY, YO.’

In the late 1980s, Kass created her first significant body of work entitled the Art History Paintings, in which she established appropriation as her primary artistic modus operandi. Combining frames lifted from Disney cartoons spliced with paintings by contemporary masters including Pablo Picasso, Jasper Johns, and Jackson Pollock, this early suite of work also introduced many of the central concerns of Kass’ work to the present.

"Andy, really, changed everything," Kass says. "It’s hard to overstate that. Andy Warhol and the romance of New York in the Abstract Expressionist era—these two completely divergent things created the art of my generation." Deborah Kass employs the visual motifs of post-war paintings to explore the intersection of politics, popular culture, art history and personal identity. Her celebrated series, The Warhol Project, from the early 1990’s refocused Andy Warhol’s eye for celebrity portraiture. Her work incorporates lyrics from Broadway musicals, movie quotations into canonical formats like Frank Stella’s concentric squares, Ellsworth Kelly’s rainbow spectrum and Andy Warhol’s camouflage patterns. "So many artists of my generation were inspired by Abstract Expressionists and the mythology of New York. Only it wasn’t mythology, it was true. I’ll always love this city."

In true Warholian fashion, Kass employed the late artist’s stylistic language to represent significant women in art, turning Warhol’s relationship to popular culture on its head by replacing his renowned American products and celebrities with subjects of her own cultural interests. For The Warhol Project (1992-2000) Kass began painting women artists and art historians such as Cindy Sherman, Elizabeth Murray, and Linda Nochlin in Warhol’s signature screen-print style. Drawing upon her own childhood nostalgia, the Jewish Jackie series depicts beloved actress Barbara Streisand as her modern-day Jackie Kennedy Onassis and Marilyn Monroe. Kass’s My Elvis series likewise speaks to the concepts of gender and ethnic identity by replacing Warhol’s Elvis with Streisand again, in her role as Yentl. Kass’s Self Portraits as Warhol further deteriorates the idea of rigid gender norms and increasingly identifies the artist with Warhol himself. Andy Warhol is Kass’ Trojan Horse; by appropriating Warhol’s infamous characters and Pop iconography, Kass is able to identify herself with history’s icons, documenting the arrival of a new history with powerful women as not only the subjects, but as the creators of great art. Kass emphatically answered Nochlin’s famous call to action:

"Women must conceive of themselves as potentially, if not actually, equal subjects, and must be willing to look the facts of their situation full in the face, without self-pity, or cop-outs; at the same time they must view their situation with that high degree of emotional and intellectual commitment necessary to create a world in which equal achievement will be not only made possible but actively encouraged by social institutions."

"?Linda Nochlin, “Why Are There No Great Women Artists-

Kass’s work embodies her concerns surrounding gender representation, advocates for a feminist revision of art and directly challenges the tradition of patriarchy. Kass asserts: “I use history as a readymade. I use the language of painting to talk about value and meaning. How has art history constructed power and meaning? How has it reflected the culture at large? How does art and the history of art describe power?" Kass’s technique of appropriation is a critical commentary on the intersection of social power relations, identity politics, and the historically dominant position of male artists in the art world.

OY/YO has been a significant and recurring motif in Kass’ work since its first appearance in 2011, taking form in paintings, prints, and tabletop sculptures. Originally conceived as a riff on Ed Ruscha’s iconic word painting, OOF, Deborah Kass has created something even bigger -- both literally and figuratively -- than Ruscha’s infamous work. She has created a monument to difference, to acceptance, and to tolerance. OY/YO isn’t just a palindrome; Kass’ sculpture is a testament to language: it’s proof of the creative magic made possible by looking at something from another perspective. Kass seeks, above all, to bring ‘OY’ to the world.

Born in 1952 while her father served in the U.S. Air Force on a base in San Antonio, Texas, Deborah Kass’s family moved back to Long Island, New York after spending two years in the Lone-Star State. Kass’s grandparents were from Belarus and the Ukraine, first generation Jewish immigrants to New York, and her parents were born in the Bronx and Queens. Kass grew up in the suburbs of Long Island, and went on to receive her BFA from Carnegie Mellon University and study at both the Whitney Independent Study Program and the Art Students League in New York before rising to art world fame. Her honors include a mid-career retrospective at The Andy Warhol Museum in Pittsburgh, inclusion in multiple Venice Biennales, and the position of senior critic at the Yale University painting program.

Her work is in the collections of The Metropolitan Museum of Art, The Museum of Modern Art, The Whitney Museum of Art, The Solomon Guggenheim Museum, The Jewish Museum, The Museum of Fine Art, Boston, The Cincinnati Museum, The New Orleans Museum, The National Portrait Gallery, Smithsonian Institute, Fogg/ Harvard Museum, as well as other museums and private collections. Her monumental sculpture OY/YO in Brooklyn Bridge Park became an instant icon, and is now installed in front of the Brooklyn Museum and Stanford’s Cantor Arts Center. Kass has been a Senior Critic in the Yale University M.F.A.Painting Program. 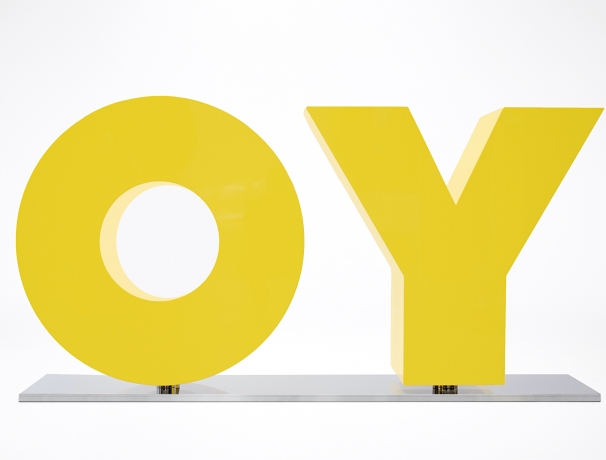 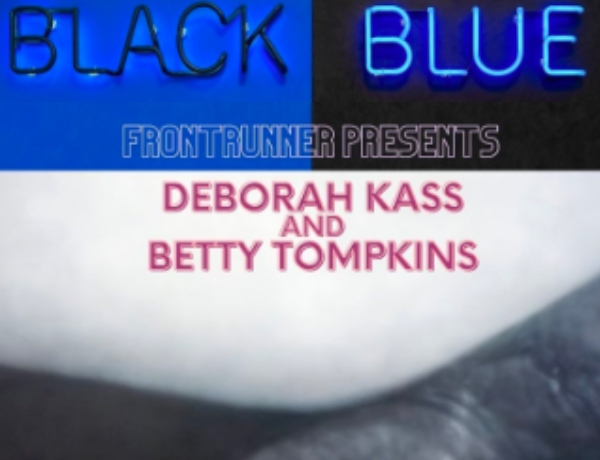