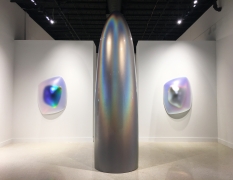 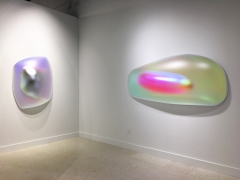 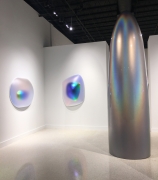 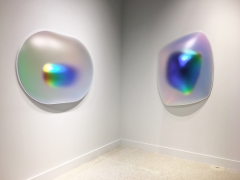 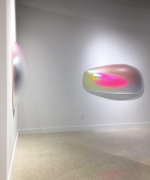 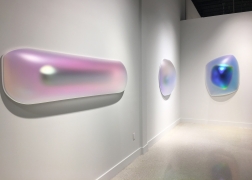 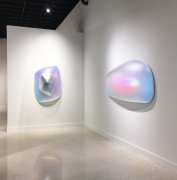 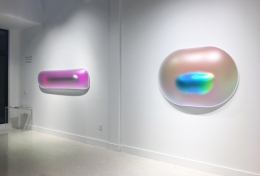 Colón’s sculpture advances the discourse of Minimalism, disrupting the traditional staid view of the hyper-masculine cold industrial object.  Colón’s innovative practice of “Organic Minimalism,” imbues life-like qualities into a reductive vocabulary of form, taking the minimal object to a new frontier. The conceptual premise underlying Colón’s distinct language of asymmetrical radiant form, is what she terms “the mutable object” or “non-specific object.” The sculptures are conceived as variable objects that transmute their physical qualities through fluctuating movement, varied lighting, changing environmental conditions, the passage of time, and the subjective perceptual experience of the viewer.

Many of the artist’s formal concerns overlap and at times challenge those of Minimalism and the Light and Space movement. Colón states, “Minimalism (both East and West coast) has historically been viewed as involving reductive forms that appear life-less, strictly material, inert, industrial and are devoid of organic qualities. The dialect of forms that I have developed (Pods, Slabs, Monoliths, Portals), all involve qualities that appear to embody some kind of energy that can relate to life-likeforms.  They appear to contain life in an abstract way. They combine the industrial with the organic, a confluence of contrasting aspects; a polarity that is present throughout Life itself and the laws of the Universe.”

The New Minimalexhibition centers on a dramatic installation of one of Colón’s signature large-scale Monoliths sculpted in iridescent carbon fiber utilizing aerospace technology. Towering at 12 tall (and above), these majestic volumes are pristinely smooth-surfaced, elegantly taper upwards, and presentno right angles, corners, edges, or visual demarcations, extending the historical development and progression of the Minimal object beyond the dominant geometry of hard-edge forms. Colón explains the complex essence of these streamlined sculptures:

“The Monoliths’appearance is high-tech, space-age, and futuristic, yet at their core they are also visceral, primitive, reminiscent of ancient cultural objects imbued with sacredness and a higher purpose, such as totems, Stonehenge, and pyramids. They contain inherent polarities, balancing masculine and feminine traits and energy. The strength of the masculine

phallic form has been softened by the ethereal ever-changing mutable surface; the initial presence of the block of massive solid matter slowly dissolves into liquid energy through the experience of implied movement in the fluid, slippery surface. The Monoliths embody dualities such as hard and soft, masculine and feminine, stasis and movement, time and energy, contrasting qualities coalescing together into one dynamic forceful object.”

Colón will also present six wall sculptures from her groundbreaking series of biomorphic acrylic Pods, which are created through a unique proprietary fabrication method of blow-molding and layering color-impregnated acrylic materials, producing sculptures that emanate, refract, and reflect light, and contain a prismatic color spectrum. She will show two large-scale forms, a Hyper Ellipsoidand a Prime Ellipsoid, measuring seven-and-a-half feet long, as wells as several other of her globuloid trademark forms such as the Skewed Square, Oblate Ellipse, and Morph. These new refined sculpturesoffer a rich palette of sleek titaniums, prismatic platinums, oceanic blues, fecund greens, radiant golds, and fluorescent oranges, highlighting the broad range of Colón’s fluctuating color spectrum.

Colón’s diverse background brings a cross-cultural approach to her practice. Born to a German mother and Puerto Rican father, she was raised in San Juan, Puerto Rico, and attended University of Puerto Rico (BA 1987). Colón moved to her adoptive home-city of Los Angeles to attend graduate school at Southwestern University (JD 1990). Her life in Los Angeles exposed her to the ideals and practices of the California Light and Space movement. Colón also credits the writings of Donald Judd and frequent visits to Chinati, Marfa, Texas, and Judd’s 101 Spring Street studio, as important to the development of the theories underlying her practice.

All current exhibitions will be on view through January 29, 2019 at Gavlak Palm Beach 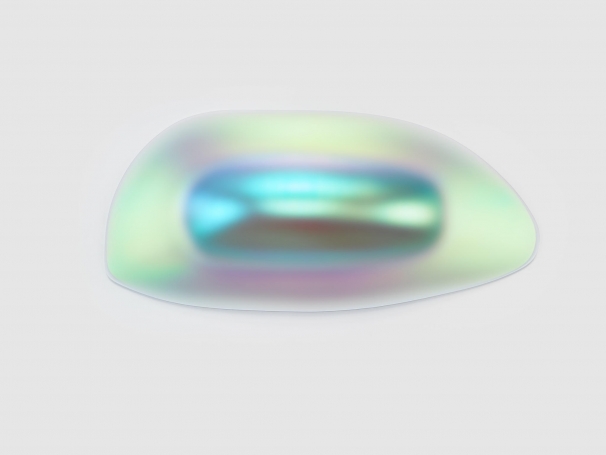 Gisela Colón
Back To Top