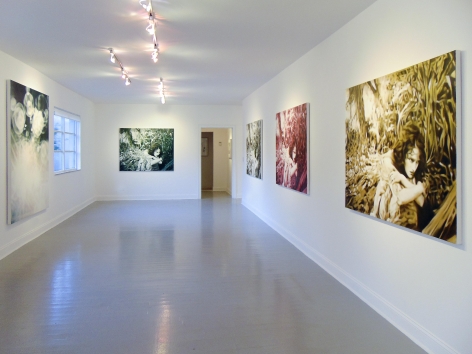 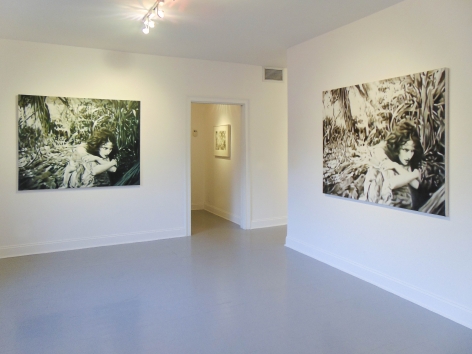 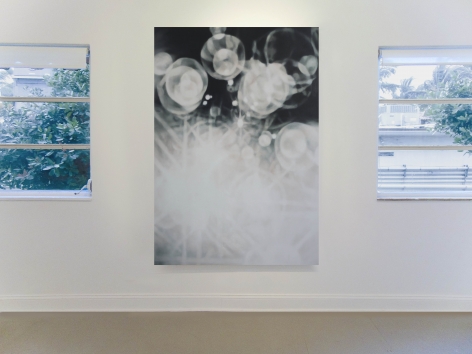 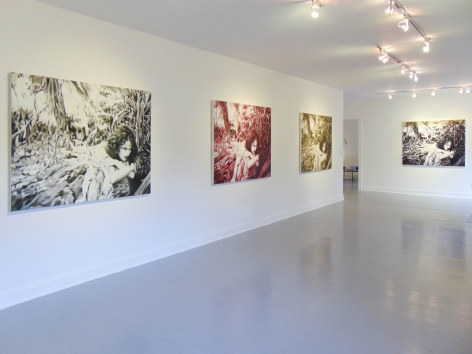 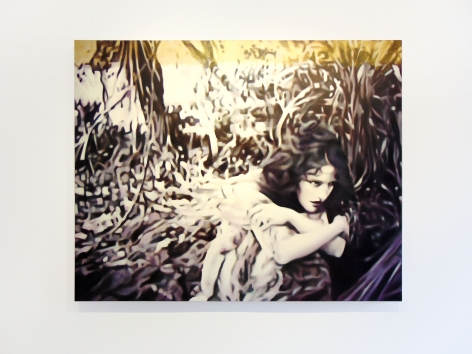 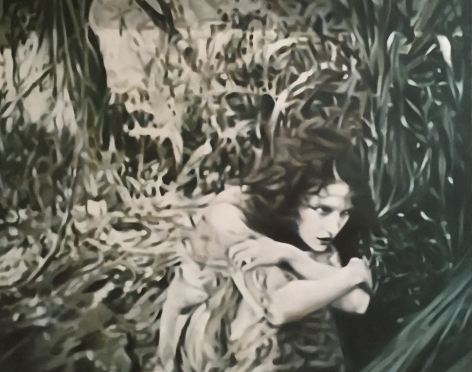 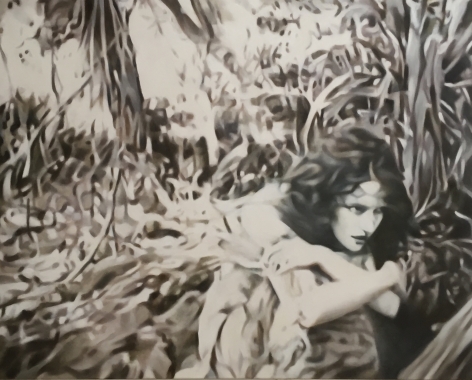 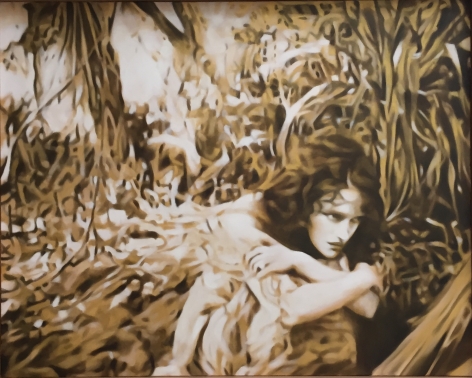 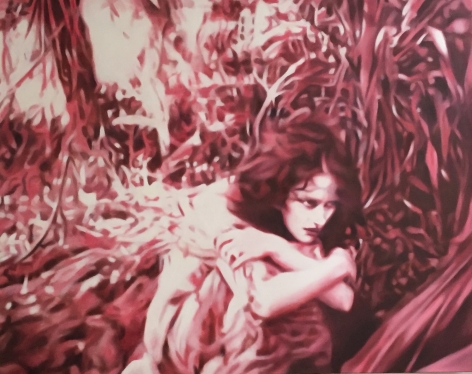 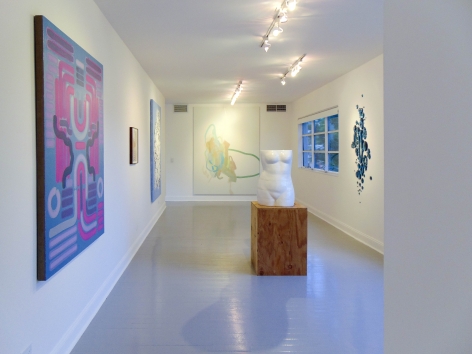 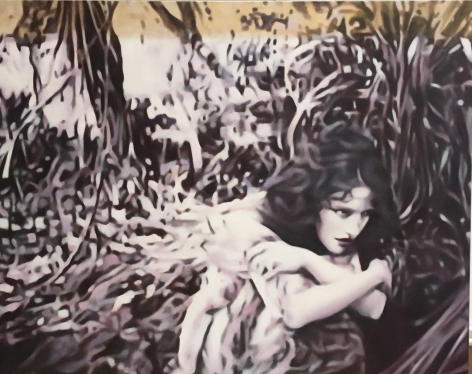 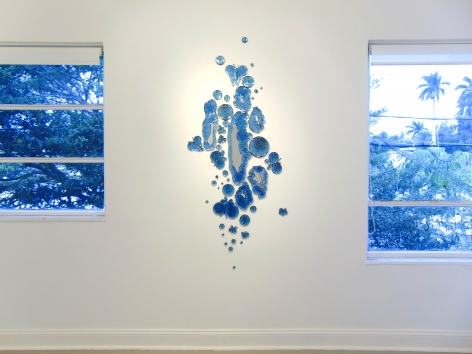 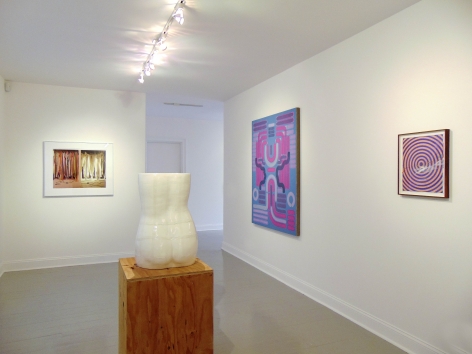 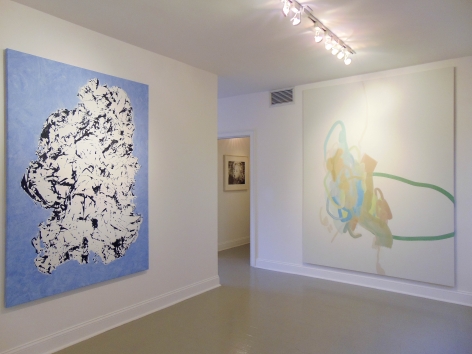 GAVLAK Palm Beach is pleased to present a solo exhibition by New York and Vienna-based artist Judith Eisler. This is the artist's second solo exhibition with the gallery. Gloria will feature five oil-on-canvas works inspired by a scene in the 1919 Cecil B. DeMille film Male and Female. The paintings take as their subject the actress Gloria Swanson, who at the moment of depiction is caught in a dream state. Trapped on an island in the film, Eisler’s works depict Swanson as she imagines herself apart from her situation, in another fantastical space.

Inspired by the self-possessed power of the actress herself, Eisler became interested in capturing this particular scene, as it portrays Swanson in an in-between space – physically rooted in her surroundings, but geographically dislocated and poised to flee, and mentally adrift in her own thoughts.  Though Eisler often takes inspiration from cinema, these works reflect a migration from her traditional composition, and see her focusing on a single image, rather than on a sequence of events.

Typically interested in the way a subject moves through an architectural space, Eisler often creates works that feature just the face or a cropped portion of her subject’s body. Here, we see Eisler meditating on the landscape as a whole, and the way in which a figure at rest can still convey movement. By creating replicas of the same image, but applying a different monochrome palette to each one, Eisler was able to turn a close eye to the nuance of the figure’s movement, and the way in which the figure itself became a veritable extension of the landscape.

Light is central to Eisler’s practice, and she has had a longtime interest in exploring how artificial light sources manipulate the way we see and understand mediated images. Light is apparent not only in how it defines the physical structure of a face but also in how it orients the subject in its surrounding environment. In these paintings, light simultaneously indicates and dissolves the features in Swanson’s face, and the definition of its flicker conveys the fleeting nature of the scene.

Taken together, the works also offer a new response to the classical representations of women in the landscape. Typically shown as a dimensionless object of beauty, and the simplified subject of the male gaze, here, we see Swanson – though still an object of the gaze –portrayed as an empowered figure, someone using her own strength to transport herself out of her current surroundings.

Judith Eisler was born in Newark, New Jersey and currently divides her time between Vienna, Austria and New York City. She has been Professor of Painting at University of Applied Arts, Vienna since 2009, taught at the School of Visual Arts in New York in 2007, and was Visiting Critic at the Yale University School of Art in New Haven in 2006. Eisler’s work has been included in notable solo and group exhibitions, most recently the group exhibition I Love John Giorno (curated by Ugo Rondinone) at the Palais de Tokyo in Paris, France. Her work was also included in: Vanishing Point: Paint and Paintings from the Collection of Debra and Dennis Scholl, Bass Museum of Art, Miami; Abstract America, The Saatchi Gallery, London; Painting of Modern Life, Hayward Gallery in London; and Castello di Rivoli, Turin, among others. 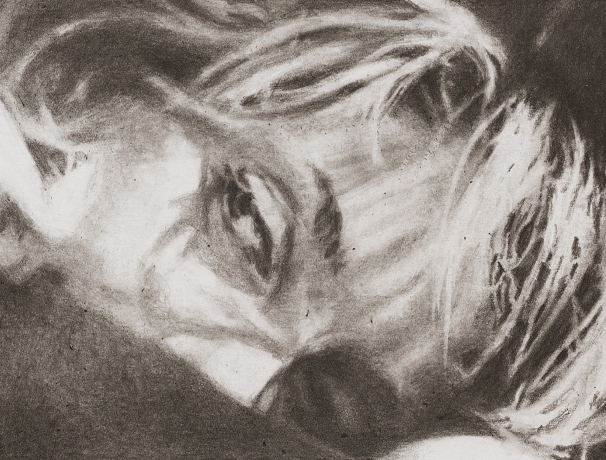