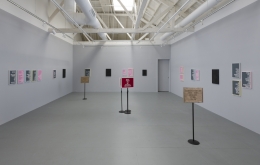 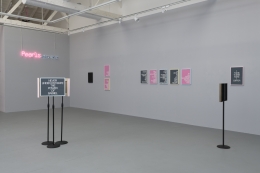 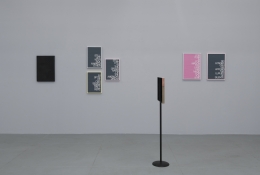 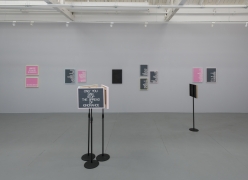 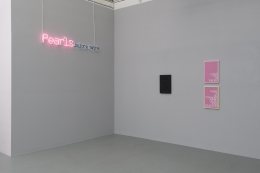 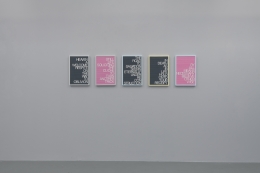 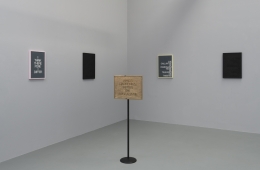 Informed by his interest in art history, critical theory, and culture, Monrow’s work features bon mots and apothegms ranging in tone from the sardonic to the polemical. Playing off the staidness of traditional visual genres (a quality typically reflected in the titles of paintings, for example), the humor in his work stems in part from an attempt to visualize abstract ideas, paradoxes, and malapropisms.

Contrasting a droll urbanity with earnest functionalism, Monrow’s work is presented in readymade industrial signage formats, such as “café boards,” and neon. Heavily influenced by the prose of the late New York bohemian poet, René Ricard, Monrow has always gravitated toward text in his work. A strong admirer of political text-based artists such as Jenny Holzer and Felix Gonzalez-Torres, and conceptual artists Lawrence Weiner and Joseph Kosuth, Monrow creates his own socio/political hybrid within this art historic tradition. Working with three possible options for his café boards (18 x 12 inches, 14 x 18 inches, or 22 x 15 inches) the amount of text, and line breaks, are determined by these physical parameters.

Each work in Absurdist Logic acts as a call to arms, a small, domestically scaled monument to truth. Monrow’s use of fragmented verse conveys substantial ideas in a very digestible, poetic format. Monrow’s otherwise quotidian signage, paired with his purposeful aesthetic choices (be it a beautiful patina, a playful mix of pastels, or a formal use of black and white) create a socially conscious, avant-garde body of work that allows viewers to easily devour the artist’s clever turns of phrase. For this exhibition, Monrow has worked in bronze for the first time, giving literal weight to his phrases. Referring to placards usually reserved for historic designations on buildings, or other “important” information, Monrow has cast the most urgent and timely statements in either matte black or gold-polished bronze. One bronze sign reads, “Twas Never About Restrooms Just Like It Was Never About Water Fountains,” which draws a parallel between racial injustice and sexual prejudice, but also speaks on the persistence of both in America today.

Twenty-five of Monrow’s colorful felt café board pieces using prefabricated plastic letters are installed on the gallery walls or arranged by way of a stand on the gallery floor. The politically charged text, “Hear Ye Hear Ye There Will Be Nothing Left of the Great Society Unless We Exhibit Courage To Become a Nation of Conscientious Objectors,” is the singular work fabricated in Monrow’s formal black and white finish. All other felt and wood works in the exhibition, such as “Don’t Tread On Me Without Permission,” have been fabricated in the artist’s specific palette of pastel hues. Monrow’s use of color puts a new spin on the readymade object, mixing formality with playfulness. The paradox that exists between the whimsical presentation and the messages themselves  is blatant, and most times humorous, as in the “Marshmallow Bunny” pink and “Butter” yellow felt and wood work that reads, “There Is No Stronger Aphrodisiac Than Rejection.” One neon text piece also holds court in the gallery, contrasting between a vivid hot pink and smokey matte black and reading “Pearls Before Swine.”

Monrow’s Wildean wit has been put to it’s most critical use in Absurdist Logic. A classic felt board work reads “The Gallantry of Radicalism Won’t Be Televised or Tweeted” and it is this essence of radicalism and revolution that permeates the exhibition. In addition to Oscar Wilde, who provided the theme of a work with the words “gross indecency” - the “crime” Wilde was charged with for being a homosexual - Monrow’s inspirations come from many and varied philosophical and literary references.  Monrow’s, “I Think Therefore I Differ,” is informed by René Descartes’ 1647 statement “Cogito, ergo sum,” putting a contemporary “identity politics” spin on an old, ontological proclamation. The work reading, “By All Means Necessary Believe Otherwise,” is informed by a phrase of the French intellectual Jean-Paul Sartre’s 1948 play, “ Dirty Hands,” of which was later made popular in civil rights culture by Malcom X. Like these works, several others in the exhibition point to the current attacks being made on civil rights, including “Still Life in the Cross Hairs of the American Dream,” adapted from the text “In the Shadow of the American Dream,” by AIDS and gay rights activist and artist David Wojnarowicz.

For more information concerning the exhibition, or for press inquiries, please contact Lauren Wood at Lauren@gavlakgallery.com, or 323-467-5700. 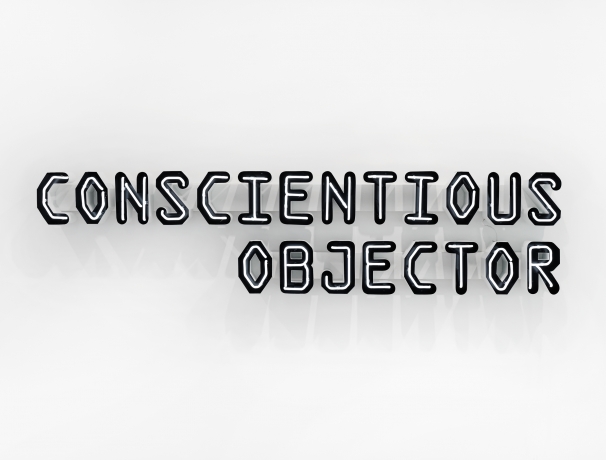 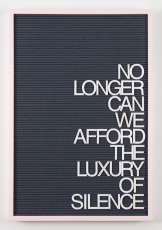 William J. Simmons is Provost Fellow in the Humanities in the art history PhD program of the University of Southern California. He received his BA from Harvard University and taught art history for three years at the City College of New York. His research and writing have appeared in numerous international books, journals, monographs, and magazines.