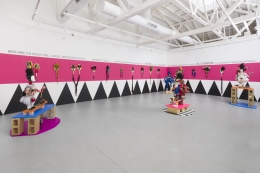 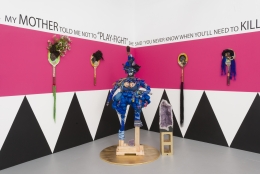 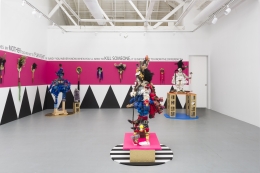 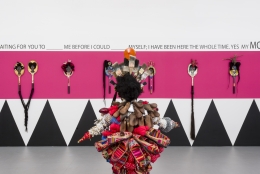 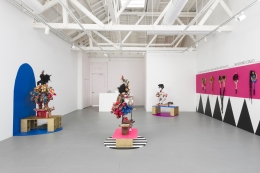 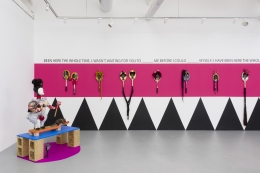 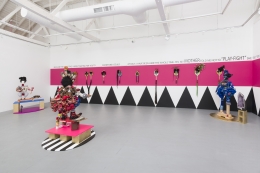 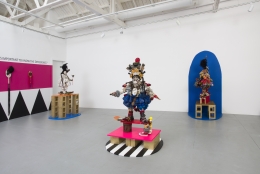 Gavlak Los Angeles is pleased to present, $LANG: Short language in Soul, a solo exhibition of new sculptures by the Pittsburgh-based artist, poet, performer, and social activist, Vanessa German. $LANG is German’s first solo exhibition in Los Angeles, the artist’s native city, and her first with Gavlak. The exhibition features a body of work created by German during her recent month long residency at Aguacate in Puerto Vallarta, Mexico. Though assembled in Mexico, many of the found objects incorporated in the sculptures were sourced from the artist’s current neighborhood of Homewood in Pittsburgh, Pennsylvania - the historic black neighborhood whose residents are often faced with systemic, institutionalized racism, and violence in their daily lives.

A self-trained “citizen artist,” German explores the power of art and love as a transformative force in the dynamic cultural ecosystem of communities and neighborhoods. As the founder of the ARThouse, a community arts initiative in her own neighborhood ravaged by gun violence, German’s art extends to helping local children heal through art  making. Recently recognized as the 2018 recipient of the Don Tyson Prize, the majority of German’s $200,000 grant is going toward opening a Museum of Resilience to honor the neighborhood's large population of black single mothers. Her spoken-word performance art, influenced heavily by hip-hop, opera and the long tradition of Negro spirituals, calls attention to the epidemic of racially charged violence and advocates for compassion and empathy in daily  life. Similarly, German’s sculptural work blends spirituality, beauty, and femininity to focus  on empowering black women and girls. In a transformative way, the artist hopes that her work gives a space for positive and inclusive manifestations of love and awareness.

Born in Wisconsin, German moved to Mid-City Los Angeles at seven months old along with her five siblings and mother, Sandra German, a fiber artist and quilter. “We were makers as a way of life. We were raised by making something,” German explains about her formative years. The multi-media works assembled for $LANG explore her lived experience growing up black in Los  Angeles and how the power of art kept her alive. German writes:

As a strange, dirty, round, nappy black girl in Los Angeles, never really smelling good, or looking hair-combed & pressed, i was always inventing things that i deeply, profoundly believed had power. People made fun of me for this. i wrote poems to cure cancer. i drew and drew and drew and drew and refused to pick my pencil up from the paper until i’d driven any thought of disbelief from my mind. i was furious with these thoughts of creativity and power; that i was alive and could make *things that had the power to do *something. i believed this like a deep, deep fire. It kept me alive.

On view in the gallery are a series of 15 mixed-media assemblage sculptures using vintage tennis rackets, titled from the specific branding text on each. German’s use of rackets stems from Intermediate axis theorem, or tennis racket theorem, an effect in classical mechanics defining the  movement of a rigid body with three distinct principal moments of inertia. German explains: “Here in this work is the rigid body (black femaleness) reckoning with three distinct principal moments of inertia: Americanness; the aesthetics  of femininity (body and sex and identity), Blackness and the value in the striations of the known and unknown, and Love & Creative Power.” German utilizes historically black found objects such as hair weave and cowrie shells to adorn her hand painted portraits of black women, creating majestic and empowered presentations of a community so commonly subjected to violence and oppression in American society.

Also on view are five of German’s signature sculptures of which she refers to as “power figures,” or “tar babies.” Created by sculpting and hand painting large figures, adding a wide range of materials from feathers, glitter, seashells, plastic toys, bottle caps, vintage products, and fabric found from both Homewood and her travels. These female figures are based on traditional Congolese Nkisi Power Figure sculptures, which create protection, fend off evil spirits, and punish wrongdoers. German’s rococo meets folk power figures confront the violence of white supremacy and racism. German describes her process of assembling these sculptures as wholly spiritual.

Vanessa German (b.1976) is a self-taught artist. She is the recipient of the 2018 Don Tyson Prize from Crystal Bridges Museum of American Art, the 2018 United States Artist Grant, the 2017 Jacob Lawrence  Award  from  the  American Academy of Arts and Letters, and the 2015 Louis Comfort  Tiffany  Foundation Grant. Her work is in many private and public collections, including Crystal Bridges Museum of American Art, Everson Museum of Art, Figge Art Museum, Flint Institute of Arts, David C.  Driskell Center, Snite Museum of Art, and Wadsworth Atheneum Museum of Art, among others. German’s work has been  exhibited widely and is currently on view at the Flint Institute of Arts and The Fralin Museum of Art at the University of Virginia.

For more information concerning the exhibition, or for press inquiries, please be in touch with Lauren Wood at Lauren@gavlakgallery.com, or 323-467-5700. 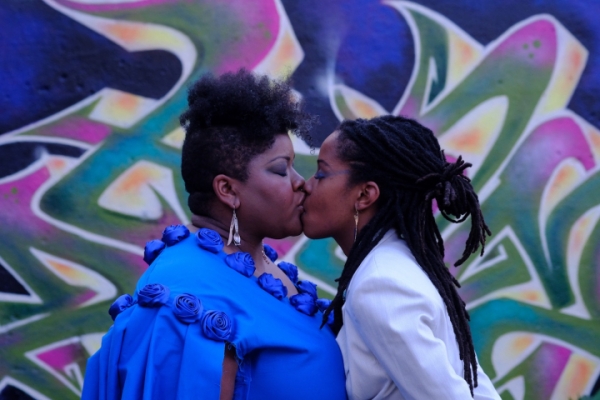 A Six-Hour Performance Centered on One Kiss

Vanessa German and her partner, Janae Brown, present an intimate exchange between Black women, a perspective absent in mainstream depictions of African-American femininity. 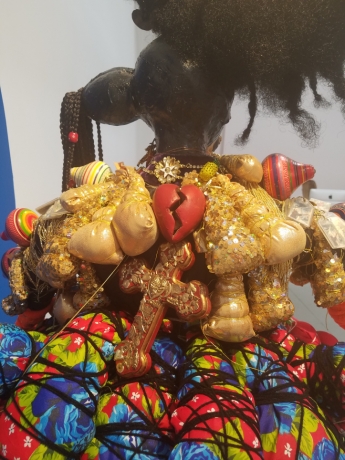 “Growing up I did not fit in. I never knew the Slang of the day. I was always ‘other’ & ‘outside of’, even in my own community I was strange. This changed for me when I had no other choice but to listen to my soul, to trust it. The parts of myself that only quake from the inside of the inside of the inside.” ~Vanessa German 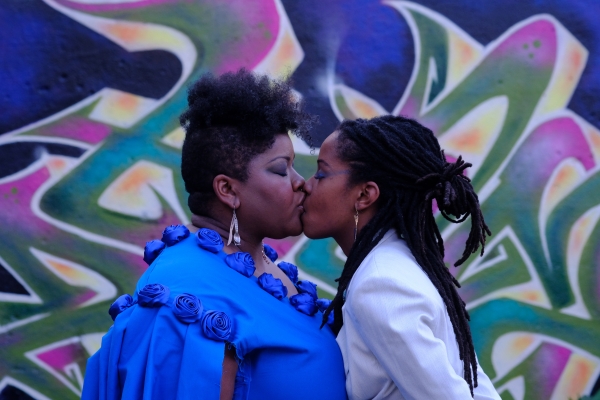 A durational performance of exquisite tenderness. 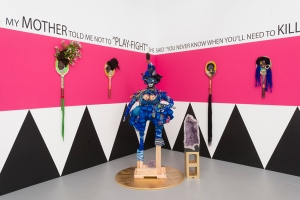 As noted in 1001 Things Everyone Should Know about African American History (1996) by Jeffrey Stewart, Althea Gibson received her first tennis racket in 1940, being barely a teenager. She was not only the first African American to win a women’s singles at Wimbledon; but also in 1957 and 1958, she achieved status of being ranked as number one female tennis player in the world! Moonwalking forward more than six decades later, Vanessa German uses the creative tool as a weapon of agency at Gavlak Los Angeles in her exhibition, “$LANG: Short Language in Soul.” Through found tennis rackets and figurative sculpture, German honors Black femininity while simultaneously assaulting circus-mirror distorting perceptions of beauty. 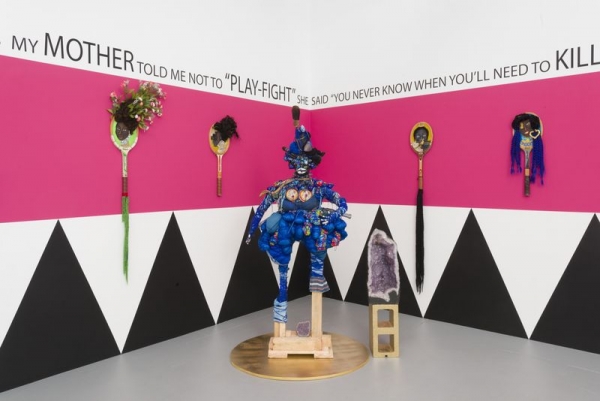 If you’ve seen “Soul of a Nation: Art in the Age of Black Power 1963-1983,” the electrifying show at the Broad museum, you may sense a vibrant, relevant thread reaching toward Gavlak gallery, where the sculptures of Vanessa German in her first L.A. show are holding forth with commanding presence.